Jump blues and straight forward boogie was Brown's style and he produced some of the best of the genre throughout the 40s and 50s in particular. He is also a clear precursor to the rock & roll that followed - in many ways a pioneer who exerted a primary influence on the popular chart music of the 50s and early 60s. His seminal “Good Rockin' Tonight” (1947) is one of the records cited as bedrock of American popular music.

Roy Brown was born in the Crescent City but moved around in his youth, finally arriving in Los Angeles at the age of seventeen. He came up with “Good Rockin' Tonight” whilst fronting a band in Galveston and the song was taken straight to the top of the R&B charts by Wynonie Harris.

Brown started to get R&B hits of his own as early as 1948 and was regularly in the charts on the Deluxe label right through to 1952, proving himself a talented songwriter as well as a skilled and extrovert performer. Hits such as 'Hard Luck Blues', 'Boogie At Midnight', 'Miss Fanny Brown' and 'Long About Midnight' kept him in the spotlight for a four to five year period, and then his Deluxe contract was bought out by King Records in 1952 - his records for King were still of a very high standard, but his sales declined dramatically. Given that he had paved the way for so much of the rock and roll that was charting at the time; it was unfortunate that Brown was unable to cash in on the music's popularity.

In 1957 he moved to the Imperial label and worked with Fats Domino's arranger and producer, Dave Bartholomew, and he hit the charts again with a top 40 version of the Domino penned 'Let The Four Winds Blow' (which predated Domino's own rendition).

He continued to record throughout the 60s on a variety of labels, including Summit, Mercury and Bluesway - good, solid boogie and blues but without any real commercial success - it actually got to the stage where he was supplementing his income by selling encyclopedias. He did start to pick up a little bit of momentum following an acclaimed performance as part of the Johnny Otis show at the 1970 Monterey Jazz Festival; a 1973 album on ABC- Bluesway followed but it all came a little bit too late for Roy. His last recordings came out on his own Friendship and Faith labels without much payback and in 1981, only 56, he died of a heart attack.

Roy Brown was an important link between post war R&B and the initial rise of rock and is still largely under appreciated by many who loved what followed him musically. He was undoubtedly an innovator, influencing any number of artists who followed. 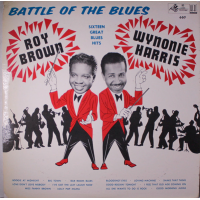 Battle Of The Blues

Battle Of The Blues

All About Jazz musician pages are maintained by musicians, publicists and trusted members like you. Interested? Tell us why you would like to improve the Roy Brown musician page.