Her voice carried a fascinating mixture of sophistication and down-to-earth power that evoked Bessie Smith and the other vocalists of the classic era, and she did much to set in place the outlines of early rock and roll. LaVern Baker was one of the most original and significant African American vocalists of the 1950s and early 1960s.

Baker was born Delores Williams on November 11, 1929, in Chicago. Her aunt was the classic blues vocalist Memphis Minnie, and she began to sing with friends at an early age. The raw power in her voice, came from gospel; Baker joined the choir at her Baptist church at the age of 12. By her late teens, she was singing blues and pop in Chicago nightclubs. She had a separate alias for each of the two images she wanted to project; for the down-home crowds recently arrived in Chicago, she took the name of Little Miss Sharecropper, while for other club dates she used the name Bea Baker. The name might have been derived from Memphis Minnie's real name, Merline Baker.

One of the musicians who recognized Baker's talent early on was swing bandleader Fletcher Henderson, who heard her in a nightclub in 1947. Baker made some blues recordings under the Little Miss Sharecropper name in 1949, and while these vanished without a trace, her reputation in Midwestern clubs continued to rise. She toured extensively, both as a solo artist and with the Todd Rhodes Orchestra. Appearing at Detroit's legendary Flame Show Bar, she made another influential ally in future soul superstar Al Green, who managed Baker for a time and landed her a recording slot with the Columbia label. She also took vocals, not always credited, on recordings by Rhodes and bandleader Maurice King.

Baker rose to stardom when she was signed to the Atlantic label in 1953; it was there that she finally adopted the stage name of LaVern Baker. Atlantic had pioneered a distinct rhythm-and-blues sound favoring sharp, precise arrangements that nevertheless kept in touch with the emerging rhythms of the streets. The material and sound that the label sent Baker's way showcased her skills perfectly. Baker's second recording session for Atlantic yielded the hit “Tweedlee Dee” in 1954. The recording rose to Number Fourteen on the pop charts and reached the one-million sales mark.

Baker pressed on, and recorded a tribute album to Bessie Smith in 1958. The following year, she reached the pop Top Ten charts with the sultry “I Cried a Tear.” The song featured saxophone work by King Curtis, who offered a close instrumental counterpart for Baker's own style. Baker had another minor hit with “Saved,” a quasi-gospel number.

However, as popular music moved in new stylistic directions in the 1960s, Baker's popularity declined somewhat. She moved to the Brunswick label in 1963, but derived much of her income from live concert appearances during the 1960s. During the Vietnam War, she gave concerts to entertain U.S. troops.

Baker's later years would seem an ideal subject for cinematic treatment. In 1969, while on tour in Vietnam, she fell seriously ill with pneumonia. She survived, but faced a lengthy period of recuperation in the Philippines. After her recovery she decided to stay there, and landed a job as entertainment director at the U.S. military base at Subic Bay. She raised a family in the Philippines, and did not return to the U.S. mainland for nearly 20 years. The stay might have been permanent had not the American popular music industry finally begun to honor its legends.

In 1989, Baker came back to the United States to attend the 40th-anniversary celebration at Atlantic Records. Baker performed at the star-studded event, which was held at New York's Madison Square Garden. After that, new opportunities began to flow Baker's way. She made extended appearances on Broadway as a replacement for vocalist Ruth Brown in the rhythm-and-blues-themed musical Black and Blue, recorded two new albums and a song for the soundtrack of the film Dick Tracy, and performed club dates in New York.

Baker was honored in 1990 with induction into the Rock and Roll Hall of Fame and with a Career Achievement Award from the Rhythm & Blues Foundation. She released “Woke Up This Mornin’” in 1992 with an all star lineup of guitarist Cornell Dupree, drummer Bernard Purdie, keyboardist Paul Griffin, and bassist Chuck Rainey. This was a great set of R&B classics and popular standards done in the unique LaVern Baker style.

Tragically, illness cast a dark shadow upon Baker's life. Afflicted with diabetes for many years, she was finally forced to undergo a double amputation of her legs. As was typical of the determination she had shown throughout her career, Baker returned to performing. Down Beat magazine lauded the “heart-wrenching set” she performed in Newport, Rhode Island at the Rockport Rhythm & Blues Festival during the last year of her life. 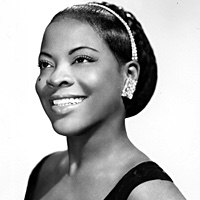 All About Jazz musician pages are maintained by musicians, publicists and trusted members like you. Interested? Tell us why you would like to improve the LaVern Baker musician page.