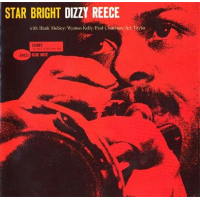 In the 1950s and '60s, there were two jazz trumpeters named Dizzy. One was famous. This is the other guy.

Dizzy Reece is a pretty obscure name, even among Blue Note fans. He was a young hard bop trumpeter from Jamaica who spent most of the 1950s playing in Europe, recorded four very good records as a leader from 1958 to 1962, mostly in America, then vanished for 20 years.

Fortunately, some of Reece's best work was preserved on three Blue Note records: Blues in Trinity in 1958, Star Bright in 1959 and Comin' On in 1960.

The middle album, Star Bright, shows incredible promise. This is a trumpeter who could have been a star. Though he was no innovator, unlike that other Dizzy guy, Reece was still a really good bopster.

Star Bright features six songs: three standard bop numbers, two blues pieces and one tune with a swing feel. The band, other than Reece, is full of well-known names, so it's no surprise the music rocks. There's Hank Mobley on tenor, Wynton Kelly on piano, Paul Chambers on bass and Art Taylor on drums. With this backing band, Rudy Van Gelder could have pulled any schlub off the street, handed him a kazoo and it would have sounded great.

OK, that undersells Reece, who really was a fine trumpeter. How fine is hard to tell based on scant evidence. Not a firestarter like Dizzy Gillespie, Reece was softer, more soulful, but still capable of keeping up with the fastest tempos.

Star Bright feels like one of those classic Blue Note affairs in which all the pieces click. To my ear, Kelly is the standout, especially on a truly terrific, jaunty blues number, "Groovesville." But really, that's a matter of taste. The bright piano is a great contrast to the hard horns. And Mobley is his usual wonderful self.

Overall, Star Bright is a fun, hard-working, hard-bop record. Reece has the chops and, more important, the blues feel. If the record doesn't stand out as a great one, it also doesn't wilt, either. It stands up well, and makes me wonder why this particular Dizzy never made a name for himself.