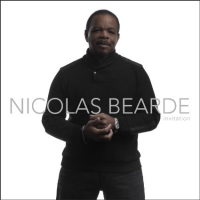 A jewel always shines brightest when placed in just the right setting, and boy does this album emphasize that point. When Nicholas Bearde's soulful and affecting baritone sits atop these impeccably tailored arrangements of sterling standards, the results are absolutely stunning.

With his four previous albums, the Bay Area-based Bearde has managed to dance around labels. He's flirted heavily with the smoother side of jazz, delivered R&B-centric music, and dabbled in a variety of other settings, never staying in one musical locale for long. Until now, that is. With Invitation, Bearde commits to a straight-ahead sound from top to bottom, delivering a homerun of an album that showcases his mastery of phrasing, shading, and lyric(al) dissection. He teams with pianist Nat Nat Adderley, Jr., who plays piano on seven of the nine tracks, co-produced the album, and arranged all of the music, ultimately bringing directness, substance, and subtlety into the mix. Their simpatico connection helps this music to soar.

The album opens on "Come Back To Me," the first of three numbers featuring guest saxophonist Vincent Herring. It's a 4/4 swinger with waltzing bookends that gives Herring some space to shine and finds Bearde delivering the lyrics with a casual and confident approach, completely relaxed and assured in nature. Then comes "Dindi," an astounding display of musical taste, discernment, and nuance. The song seamlessly shifts between different feels—rubato expressions, lightly flowing time, earthbound swing—and Bearde completely owns the song. It's a standout on an album full of them.

Further on there's a gripping "Nature Boy" that brings Herring back into the mix, an intimate "Lush Life" that focuses in on voice and piano, a breezy trip through Billy Eckstine's "I Want To Talk About You" with some space for Anton Schwartz's tenor saxophone to shine, and a percussion-dusted trip through "Maiden Voyage" that draws attention to the infrequently encountered lyrics of that Herbie Hancock classic. Every single one sparkles with the light of authenticity and class. If you haven't heard Bearde sing, this is the place to start. Invitation is an out and out winner that should help to elevate Nicolas Bearde into the upper echelon of the vocal jazz world.

Come Back To Me; Dindi; My One And Only Love; Nature Boy; Invitation; Lush Life; I Want To Talk About You; Maiden Voyage; Save Your Love For Me.