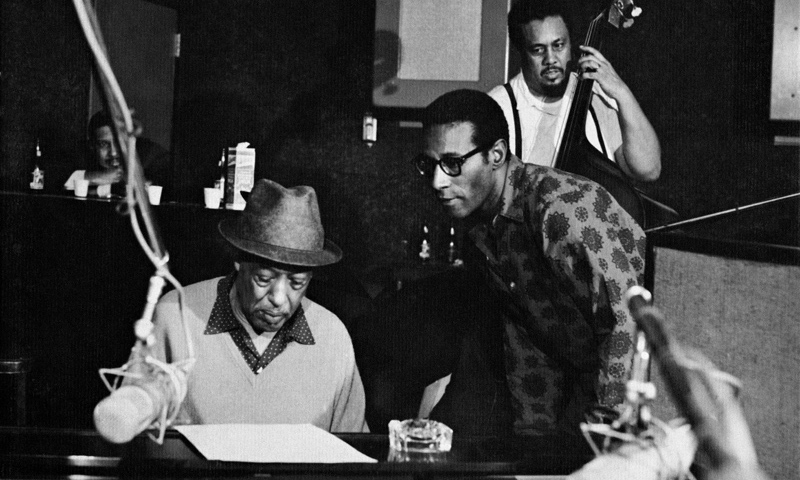 By GRAHAM E PETERSON
October 23, 2015
Sign in to view read count
Duke Ellington was born at the turn of the century. Because his career stretched from the roaring twenties to just after the Nixon scandal, and because of the large breathe of his work he has been a household name for decades. Most individuals know Ellington for his work pioneering big band music, as a bandleader, composer, and brilliant improviser. Few ever reference Ellington's solo piano music or small ensemble work; mainly because he did not make many recordings of this nature. A session such as Money Jungle (1962) reveals a side of Ellington that was not often seen, and is an introduction to Ellington's continued growth and innovation even in his later years. It was a more intimate departure from the blaring big band sound that he pioneered playing in Harlem at the Cotton Club. Rather than playing intense and challenging arrangements for a dance audience, the Money Jungle trio focuses more on creating and developing motivic ideas and listening to one another. Improvisation in this setting becomes more of a group effort rather than one soloist at a time.

On September 17, 1962, Duke Ellington, Max Roach and Charles Mingus got together with no rehearsals for a recording session of trio music. All that the sidemen were given before playing were lead sheets with written melody and chords, and a visual description of the meaning of the piece. For the title track, Ellington told his sidemen to visualize that "crawling around on the streets are serpents who have their heads up; these are agents and people who have exploited artists. Play that along with the music." Charles Mingus had been a long time admirer of Ellington and although he may have been excited to have been asked to play with his longtime hero, he did not show any sign of it; stating that he would only play the date if they would hire Max Roach to play drums. This recording represents the coming together of the older tradition and the younger bop schooled musicians who had moved away from what many of them considered to be "Uncle Tom" music. Mingus and Roach played music for musicians; Ellington was an entertainer who played dance music. Ellington's music was being performed in dance halls and his larger more artistic compositions were reserved for concert halls while the beboppers were still in smoke filled clubs with no dance floors. This recording session was the summit of two generations that bridged the gap between swing and bop. It was the arrival of the avant-garde that would define the turmoil of the middle and late sixties. In this session Duke Ellington collaborated with Charles Mingus and Max Roach to create on of the most important jazz albums of not just the decade but also the entire century. By collaborating with younger pioneers of more modern music, Duke allowed himself to be pulled into new harmonic, rhythmic and melodic ideas while Mingus and Roach were able to gain the experience of playing with a master of their art. This recording session marked a new sound in music that helped to shape the developing avant-garde jazz movement.

The album Money Jungle was officially released in February of 1963, just three months after the assassination of President John F. Kennedy marked the plunge into the chaos that was the middle and late sixties. Bringing together Duke Ellington, Charles Mingus, and Max Roach was not just recording three excellent and genius musicians; it also brought together three of the most radical civil rights activists in jazz. From the 1940's to the beginning of the 60's each one of these musicians released a work directly related to issues of civil rights. Max Roach's We Insist! (Max Roach's Freedom Now Suite) was first released in 1960, following Mingus' Mingus Ah Um which features the piece "Fables of Faubus," a direct reaction to Arkansas Governor Orval E. Faubus calling in the national guard to prevent nine African American children from entering an all white school. Mingus originally wrote lyrics to this piece that Columbia Records refused to record, as they were too controversial, and it would be another year before Charles Mingus would record a version with his original lyrics. Inspiring all of this was Ellington's Black, Brown, and Beige, an extended composition that tracked the roots of the African American from the days of slavery to the very beginning of the civil rights movement that his consciousness-raising work would help to ignite.

Ellington, Mingus and Roach all had very different interpretations of the 20th century struggle that black men and women had to deal with. Ellington was more reflective with a historical approach, but Mingus and Roach were aggressive. Roach's title We Insist! says it all. These are individuals who have become aggressive through years of oppression, and are ready for the leadership of figures like Malcolm X and Dr. Martin Luther King Jr. This aggression comes through in Mingus' bass playing and string bending on Money Jungle and Backward Country Boy Blues, and in Max Roach's intense, driving bop and hard bop technique that he pioneered. These musicians were doing more than just playing on this day in 1962; they were expressing their dissatisfaction with a society that did not value their very existence. This recording takes the listener on an existential journey for meaning through the medium of the avant-garde.

Ellington was one of the most pioneering American composers in the 20th century in regards to harmonic structure, rhythm, and arranging. He created the paradigm of American music that Mingus and Roach were working to shift. Despite all of Duke Ellington's amazing innovations in compositions and in music, it is important to note that until this point his music was primarily dance music. Jazz had strayed far from "Jungle Nights in Harlem" and was now reserved for smaller clubs that hosted quintets with no room for dance. Hipsters, beats, and poets who were into liberal experimentation with sex, drug use and improvisatory art, were replacing well-dressed upper class patrons looking for an evening of big band swing. This new direction drags Ellington into new treatments of dissonance and motivic ideas. The title track Money Jungle in its most basic form is just a 12 bar blues. Mingus' aggressive bass style grouped with Ellington stretching into more altered and unresolved chord tensions and Max Roach's fiery drumming, creates a completely different approach to playing a blues. Where most jazz basses would walk, Mingus moves to the upper end of his range digging into one note so aggressively on one motivic theme that he bends the pitch. He rarely plays a straight walking bass line for even an entire chorus. This alteration in style for Ellington led to players altering forms entirely and even throwing them away to create more avant-garde music.

Charles Mingus and Max Roach came from the Charlie Parker school of thought in terms of improvisation, and the Thelonious Monk school in regards to space, treatment of dissonance and from both they take logic. The beboppers were very logical yet very chaotic musicians. Their music involved playing long runs of swung eighth notes that sounded like Jackson Pollock splashing you with a paint can, yet each line was focused. Every downbeat was a chord tone, and all scale tones or chromatic tones happened on the offbeat. No matter how chaotic this music got it always had focus. Every musical phrase or idea was going somewhere, and it was never just floating off into the ether. They had more enlightened views on syncopation and harmony (particularly suspended dissonance). Just as Ellington's earlier records influenced them, these two musicians took Ellington down a road of more modern possibilities. While Ellington wrote the majority of the music for this album, Mingus and Roach bring an unperceived dimension to the music; such as Mingus insistently hitting the same high notes continuously even if they may not be rhythmically or harmonically functional in a traditional bass function. Rather than playing the role of a bassist for a piano trio, Mingus insists on being on the forefront and playing more compositional lines. When Ellington hears this he at first just fills in the blanks for Mingus' odd playing. By the time they get to Money Jungle, rather than playing more traditionally, Ellington is right behind Mingus; diving deeper into the abyss while Roach keeps everything together with his polyrhythmic style.

The intensity grew thick as the session went on. Mingus and Ellington had had falling-outs in the past but if they have any residual issues with one another neither of them had shown it. The real conflict was between Mingus and his contemporary: Max Roach. Among jazz musicians, and especially beboppers, there has always been a tendency to try and out do one another. Mingus had criticized some of Roach's playing that day and the producer of the album Alan Douglas recalls the boiling point of the session.

Mingus started to complain about what Max was playing. Mingus was getting louder and louder as the session went on. I forget what song they were doing, but in the middle of it Max kind of looked up at Mingus and smiled and said something. And at that point, Mingus picked the bass up, put the cover on it and just stomped out of the studio.

Ellington had to chase Mingus to the elevator and convince him to return by reminding him how good this record label had been to him. The tension between these three players be it due to Mingus' anger or the age gap between Duke and his sidemen, led to an interesting communication of music that often can sound more like a shouting match than one of Haydn's "intellectual conversations amongst equals."

It became clear that Duke was more than aware of the music his sidemen and their peers have been playing at the beginning the album with the opening track "Very Special." He had a Thelonious Monk style approach, rhythmically involving short motivic phrases displaced throughout the measure rather than more traditional melody based phrases, or the barrage of notes that Charlie Parker used to define a new generation of playing. Instead, Duke followed a method of phrasing that is similar to a style later explained by jazz educator and trombonist Hal Crook. Crook's method of improvisation follows several different steps with the idea of creating a motivic themed solo rather than an explosive bop solo, including utilizing space, repetition, fragmentation, extension, and displacement. Space meaning resting for entire measures or longer and repetition being rather self-explanatory, once a theme is developed the concept of fragmentation and extension simply means playing short parts of the theme rather than the whole phrase or extending it with more notes to take up more space. This is similar to Haydn's string quartet op.33 in Eb Major. The final method that Crook describes that all three musicians used, is the rhythmic displacement of the phrase. Ellington would take one phrase and play it starting it in different parts of the bar. This created rhythmic motion and can even fool listeners into thinking that more polyrhythmic ideas are being formed.