BY HENNING BOLTE
October 23, 2015
Sign in to view read count 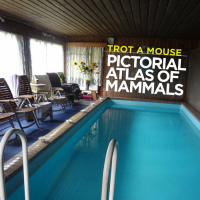 At times the music of an album can be strikingly different from common and even one's own perceptional mental grids and might challenge one's own horizon of expectation. This album is not only a clear example of it. It is unusual and fascinating how adversative, contrastive features are balanced out in its music: rough and gentle, raw and breezy, thwarting and streaming.

Remarkable here is the gripping impact of its special unity of the sound of the 6-string electric bass guitar, viola and saxophone in the album's ten pieces. Again and again transition occurs at the right moment and, with the music's evanescent qualities, melody constantly permeates different textures and temperatures. It is not so surprising anymore that at closer inspection it reveals that two pieces are adaptions of Renaissance composer and lutenist John Dowland (1563-1626) famous songs "Flow My Tears" and "I Saw My Lady Weepe." A 'translation' to this instrumentation is unlikely and daring. Here it's a proof of the reconcilability of the seemingly irreconcilable. It may be regarded as unusual to record this kind of music with an electric bass guitar at the center. A key factor for the accomplishment is the viola played by Mat Maneri. Maneri's special way of playing, its differential quality, provides the electric bass of a shadowy, darkening transitional edge that blends subtle with the timbre of Ingrid Laubrock's horn. Electric bass techniques and sounds are freed here from stylistic cliché. The music is strongly contoured by Tom Rainey's urgent drumming. It is marking and hatching in-between spaces. Often it sounds as if more than the four instruments of the line-up are involved. It is also a good surprise that guitarist Ryan Ferreira was involved in the recording and mixing of the album.

Jermyn is a real explorer of the musical possibilities of the 6-string electric bass. He works with Jim Black's Smash and Grab, Howard Peach (with Belgian drummer Lander Gyselinck and reedist Chris Speed), a collective trio with saxophonist Jerome Sabbagh and drummer Allison Miller and he has a solo project, "Spirit Spout," devoted to tape pieces for electric bass and guitar.

The music of the album might transcend conditioned horizons of expectation but it might also uncover and fulfill secret desires of (re)sounding sounds -as it does for the author himself. Pictorial Atlas Of Mammals is a daring album full of surprise and delight. It achieves in a strong and convincing way what in other cases often is just asserted.

Otis; Victor; Flow My Tears; Balance itself is the good; Hive; Lean; Canoe; Firmly, like an anchor to a balloon; Circus; I saw my baby weepe

About Simon Jermyn’s Trot A Mouse