Sure, sometimes a jazz writer gets a new disc, say Joe The Plumber Sings Sinatra, and he/she might put it on the top of a stack of things entitled "things I have to get to if John McCain decides to run again." But these are recordings by the brilliant Dave Douglas. His quintet is, perhaps, the 21st century equivalent to trumpeter Miles Davis' bands. I dig these bands, and Douglas perennially gets my vote for best jazz musician.

Why wasn't I listening to it?

The why may be tied to the what it is that awaits me. 7 GB of music was my task. Let me put that in perspective: 7 GB is 22 hours of music, as two different bands played 20 sets spanning 10 days at New York's Jazz Standard. That's 20 CDs or, let me get a calculator... something like 38 LP sides. Certainly my iPod can handle it, but the human factor worried me.

Douglas' Greenleaf Music offers CDs, plus news and information, from Douglas' various bands and Greenleaf artists Donny McCaslin, Michael Bates, Nicole Mitchell, and Kneebody. But you can also purchase music, cheaper, in digital form from Greenleaf or the stellar west coast label Cryptogramophone in MP3 format or the CD-quality FLAC. Please don't ask me to explain the difference.

What is really innovative is Douglas' experiment of posting live music shortly after his band finishes their nightly gig. Available here are his Quintet's six nights at the Jazz Standard in 2006 and his band Keystone's four nights in 2008.

What are the issues revolving around 7 GBs of music? Has music entered the Costco world where you can buy 240 rolls of toilet paper as you might once just buy a 4-pack? My hesitation was caused by my approach to listening—and, maybe more importantly, the question of what exactly you have when you possess gigabytes of music instead of a CD box set, or some vinyl, with accompanying artwork and liner notes. 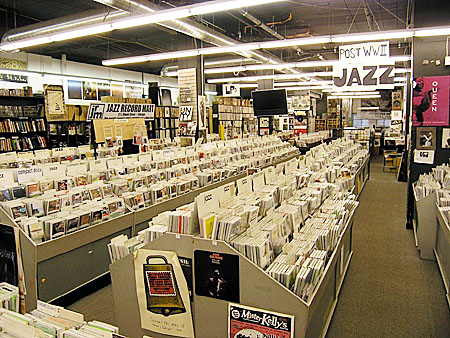 You see, the experience of music buying has always involved a bit of a fetish for me. The collector fetish perhaps, but maybe more the fascination, the fancy or weakness, for the idea of exclusivity, listening to a new find at your local record store. A physical place, unknown to some younger listeners, where humans once went to peruse labels, shop, and discuss music with record selling professionals. At least for four generations now, jazz fans have obsessed over the talisman that was a dusty 78, the amulet afforded by Blue Note LP covers, and images or idols presented by Francis Wolff and William Claxton's cover photography. The history and context of the music was passed on through liner notes penned by the musician or a leading writer of the day. But what do you have when you posses the digital file? What would a subscriber to Record Changer magazine in the 1950s think if he were transported into this iPod age?

The task at hand is simple: listen. But the length of time involved is problematic. My wife wondered if there is an auditory equivalent to Viagra (not that I would have any experience with Viagra) to allow my ears to remain raised throughout.

But perhaps listening in the 21st century is different from doing so in the 20th. When painter Georgia O'Keefe was asked if she listened to music while painting, she replied that when she listens to music, she only listens to music, and when she paints, she simply paints, and when she eats—you get the idea. But then she didn't grow up with baby boomers who could read comics while watching Gilligan's Island and playing the board game Operation. Then there are our children who have never known the eight-track tape or The Partridge Family. I recall a talk by DJ Spooky, aka Paul Miller, in which he claims his generation is not interested in the entire song (let alone an entire album), but only in parts of it, maybe the bridge or an interesting solo to build a cell phone ringtone. Yikes!

I consulted two friends, Keith and Chad, both avid Grateful Dead fans for possible insight into the consumption of large amounts of recorded music. Years before the digital world enabled a project like Greenleaf Music to become available, fans of the Dead have traded tapes of shows that lasted for hours and hours, sometimes days. Both Keith and Chad have responsible jobs, children, and lawns to mow, but retain the tie-dyed and loyalty to all things Dead. Chad, a musician himself, explained to me that he cannot sit and listen to music like he once did, but makes it the constant companion when home or while driving, giving him the added benefit of indoctrinating his children in Jerry Garcia. Keith, who has a librarian's mind for cataloging Dead shows, sets and guests, suggested that I take a step back from the microscope and view the entirety of the body of music. The music, like a vista can be enjoyed in its entirety.

Fair enough. I was thinking of the rocks, but look up—there's the Grand Canyon.

Keith and Chad also suggested that I get over my album cover fetish. But I told them that when I drop in a record store and sort through the LPs or CDs, I immediately know which ones I already own by the cover art. With digital works, the visual filing system of my brain is of no use. Chad's response was, "l think one day, my kids may ask 'daddy, what was a record store?'" Tomorrow's collections or archives of music will be on hard drives and the collector will be a dinosaur.

Of course all this began when we were chasing Buddy Bolden around New Orleans in the early 1900s, trying to capture his sound on record. Some say he resisted the new process of recording because he didn't want other musicians to steal his sound. At that time the performance was paramount—and maybe with the decline of the recording industry it will be once again. The experience of music may return to the live event and writers will once again make legend reporting on shows like saxophonist Ornette Coleman's or pianist Thelonious Monk and saxophonist John Coltrane's six month residency at the Five Spot in New York.

I consulted Ben Ratliff, music critic for the New York Times. His first preference is always the live event (of course, he lives in NY), and all the connotations a shared experience entails. He suggest that with a project such as these Live At The Jazz Standard sessions, that it is only the "deep-exposure, long hours of listening" experience that allows you to really "get it." He suggests, and I ultimately settle on his description, of treating these 22 hours as chapters of a book.

But it once took me an entire year to read David Foster Wallace's 1088-page Infinite Jest. Where I set Wallace's book aside multiple times to read about a dozen other books, I pledged to maintain my loyalty to Douglas' 10 days at the Jazz Standard.

I had caught the Quintet live a couple times and had already heard the 2-CD Live At The Jazz Standard which was taken from those 6 nights in 2004. This new listening experience entails 44 different compositions—79 tracks featured the stellar lineup of Douglas on cornet, Donny McCaslin on tenor sax, Uri Caine on Fender rhodes, James Genus on bass, and Clarence Penn on drums.

To listen only to Douglas' bands for the next 22 hours was physically impossible. I chose to play his music whenever I had the opportunity. That included adding the iPod and the automobile into my collection of home stereo and work setup.

I began on my sofa after dropping a couple burnt CDs into the tray. The FLAC (which I first thought was a Basque separatist organization) lossless encoding gave me crystal clear sound. The in-the-room feel had the occasional crowd sounds, one of my favorite touches from Miles Davis' 1965 recording Complete Live at the Plugged Nickel (Columbia, 1965) and pianist Oscar Peterson's The London House Sessions (Verve, 1961). I could get used to this kind of listening. I was familiar with Douglas' music, and simply incorporated it into my daily routine. They cover "Elk's Club," an off-kilter blues, multiple times, each one handwritten differently, with the odd animal calls and trumpet burps, as they do "The Team," a set ending track that, like Miles Davis' "The Theme," leaves you juiced for more music.

I found out fast enough that auto and work were not satisfactory listening spaces. Maybe on a long car trip, but not dodging through traffic and being productive at a desk. Both turned the Quintet into muzak.

The iPod was another experience all together, and the chore that was dog walking suddenly became mine. I took long walks in the woods for the Quintet, and in an urban setting for the funkier Keystone. Just me and two earphones created new worlds to explore. Luckily, Fat Louie, my dog, was up for the adventure.

Taking each set as a different chapter allows you to sit in with the band and get a micro-picture of a working unit. Taking the whole 7 GBs in without interruption of other music, podcasts, or books-on-tape allows for immersion rarely experienced in these times. But then again, I may not be telling you anything you don't already know. The act of divesting one's self of the fetish aspects of music collecting is almost a zen experience—as the teacher smashes the student's favorite teacup, he realizes the cup wasn't as important as the meditative ritual of preparing and consuming the tea.

The same may be said for the modern music experience and the possibilities of full immersion afforded by vast resourses such as Greenleaf's digital recordings. The act of really listening once again is paramount. But I still may shed a few tears for the dusty record shop, the LP cover, and out-of-print CD.