By Troy Collins
January 5, 2010
Sign in to view read count 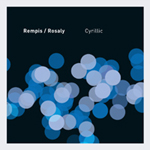 Since 2004, the duo of saxophonist Dave Rempis and drummer Frank Rosaly has committed to exploring the textural, tonal and rhythmic possibilities of spontaneous improvisation, drawing upon a rich legacy of similar pairings for its studio debut, Cyrillic. Chicago scene regulars whose congenial rapport has been honed in The Rempis Percussion Quartet and The Ingebrigt Haker Flaten Quintet, Rempis and Rosaly's studied interplay lends even the most threadbare of skeletal themes a sense of foresight, making this fully improvised session one of the more concise and cohesive dates of its kind.

Demonstrating their dynamic diversity, "Still Will" and "Don't Trade Here" each unfold as pointillist exercises, offering striking contrast to the previous selections; the former operates at the threshold of audibility, the later is an episodic call-and-response structure that reveals their empathetic listening skills. Showcasing his soulful lyricism, Rempis switches to baritone for "Thief of Sleep," as Rosaly dances gingerly around his muscular, bluesy drones, providing well-placed flourishes. The vivacious closer, "In Plain Sight" orbits an angular bop theme, sending Rempis' pneumatic baritone cadences and Rosaly's swinging ride cymbal and percolating snare into a gleeful frenzy, ending the album with a joyous noise.

Now an established part of the jazz canon, the improvised saxophone and drum duet has three decades worth of iconic partnerships to draw inspiration from; John Coltrane and Rashied Ali, Anthony Braxton and Max Roach, Jimmy Lyons and Andrew Cyrille, Paul Flaherty and Randall Colbourne, Peter Brötzmann and Nasheet Waits—the list goes on and on. Rempis and Rosaly have only just begun documenting their working relationship in this format. Cyrillic is an impressive start.

Visit Dave Rempis and Frank Rosaly on the web.

Antiphony; Tainos; Thief of Sleep; How to Cross When Bridges Are Out; Still Will; Don't Trade Here; In Plain Sight.