Those jam sessions and the musician to musician contact made all the difference in the world, because the communication was just different then.

Without the contributions of producer and entrepreneur Creed Taylor, the past, present and future of jazz would be differently written.

Five decades ago, Creed Taylor produced some of Bethlehem Records' best albums, including sets by Charles Mingus, Kai Winding with J.J. Johnson, and singer Chris Connor. He became known for his meticulous preparation and musicians' ear (Taylor also plays trumpet), and in 1960 formed the Impulse! jazz subsidiary of ABC-Paramount Records. The Impulse! label quickly became synonymous with great music, releasing such jazz classics as John Coltrane's landmark A Love Supreme and Oliver Nelson's Blues and the Abstract Truth. Then, when Verve Records was sold to MGM, Taylor moved on to serve as head of Verve.

At Verve, Taylor directed nothing less than a worldwide musical revolution, fueling the international wave of "bossa nova" through collaborations with Antonio Carlos Jobim, Stan Getz, Charlie Byrd, and others. "The Girl From Ipanema" won the 1964 Record of the Year Grammy Award and the album from which it came, Getz / Gilberto , won four more Grammys including Best Jazz Album and Album of the Year.

That "Girl" remains a rare almost inexplicable moment of musical magic: Taylor, saxophonist Getz and Brazilian guitarist / vocalist Joao Gilberto romantically dance through a Jobim program, but it was Gilberto's wife Astrud whose unaffected, slightly unsure voice breathed life into "The Girl." It was her first professional performance.

Stop his story there, and Taylor's musical legacy would be secure. But he moved on to team with Jerry Moss and Herb Albert and produce albums for A&M, claiming more Grammys and gold for his work with Wes Montgomery, then in 1968 he became his own boss, forming CTI Records—Creed Taylor, Inc.

After a hiatus due to financial circumstances, CTI Records returned in the 1990s. Taylor still has not stopped, releasing Summerflood by Jurgen Friedrich (piano) and Kenny Wheeler (flugelhorn) in 2003 to critical acclaim. Taylor is also raising his internet profile through an active role in www.ctirecords.com. "We need all the support we can possibly get compiling links to our internet presence because the competition is just so heavy," he explains. "I'd like certainly to be very clear about the fact that this is the means of distribution of the jazz that I'm involved with now." Half a century from his Bethlehem days, forty years after striking artistic and commercial gold with "The Girl From Ipanema," Taylor continues with his body of work. His story and jazz his-tory seem forever intertwined.

AAJ: What inspires you to get up every morning and stay involved with this most unforgiving business?

CT: The music. And my family. I have a fourteen year old daughter who is taking trumpet lessons and she's a whiz. I don't know if you know the instrument, but she can pop off an E above high C and she's got a really nice big sound. She had to play a wind instrument, so I encouraged her to play the trumpet. She's taken piano for about five years now, too.

AAJ: Is there a singer or any other artist that you wish you would have worked with? You brought up Herb Alpert: Your style with his sound would have been romantic and upbeat and beautiful.

CT: I'd go along with that.

AAJ: I'm a big Tony Bennett fan but I don't know that his voice would have worked for you.

CT: Yeah, he would have, in fact we almost had a project with Gerry Mulligan. Gerry brought in Tony to sing on two songs on one of his 'Trane albums. Gerry was a real model 'Trane fan. So was I, and by the way so was Oliver Nelson.

Tony Bennett. Rosemary Clooney, she just knocked me out. I almost got Billie Holiday. It was just when she was kind of on her last three of four months alive. She came by my office in the ABC-Paramount building and we talked at length. When I walked her out to the elevator, I thought that we would be in the studio. Then she got sick and she passed away shortly after that.

There is a guy I really enjoyed producing: Jack Teagarden.

AAJ: Are there producers in jazz or pop or elsewhere today whose work you find particularly appealing?

CT: Well, I certainly would have to mention Quincy, regardless of what the genre of music is, just the professionalism and the originality that he puts into stuff.

AAJ: Burt Bacharach is the other singer that I wanted to mention!

CT: That would be nice. You know, I've never met Burt. He's an excellent pianist. Speaking of soft romantic singers, I was just about to get going again with Jobim. He was in New York for the 25th Anniversary of Verve Records. I wasn't with Verve then, of course, but I started talking to him again and we were definitely going to get back together. He went back to Brazil and developed his circulatory problem. He died the day after he went into the hospital.

I'll tell you who I really enjoyed producing, to go back, was Chris Connor. She had an exquisite ear for the best lyrics and the most startling kind of juxtaposed poetry. To me, Chris Connor was a gem of a singer. But she had health problems, too, and kind of slipped away.

CT: Not to the same degree. Now, that is a tough question. From an educational standpoint, musicians today are far more sophisticated, of course, than they were twenty-five, fifty, years ago. With all of the universities and Berklee being there, anybody with any talent drifts into a university and comes out a totally well-schooled, disciplined person.

I don't think the social condition exists today that existed when Gil Evans, Miles Davis, Gerry Mulligan, Kai Winding, all those guys would get together in Gil's apartment just off midtown Broadway and rehearse and rehearse and not think about where the money was coming from because they all looked out for each other.

But nowadays, and this doesn't just pertain to jazz, but the arts in general don't have the same homegrown person to person contact that existed then, experimental groups without—it's a sociological thing and I don't think it has to do with jazz per se. But it certainly...how can I say it?

AAJ: It's fair to say that society seems to grow more fragmented.

CT: That's it exactly, and with communication being so easy, with the fragmentation you're talking about thanks to the computer and all the electronic devices—plus they're confounding the issue with all the available "canned music," you know.

AAJ: The sense of community is lost in a lot of things, it seems.

CT: Here's an example of what I'm talking about: When I was at Duke, I guess I was a sophomore, Claude Thornhill's band came through. I was absolutely mesmerized listening to that band —which had, by the way, two French horns, Lee Konitz, Tony Scott on lead clarinet, Gil Evans arrangements—in the gymnasium on campus, and when the band was finished the gig, we all went out to this joint somewhere between Chapel Hill and Durham, some nightclub, and jammed until daylight. Nobody was getting paid, of course. But those jam sessions and the musician to musician contact made all the difference in the world, because the communication was just different then.

That brings to mind, I gotta tell you this: There was a bar called Charlie's Tavern smack in the middle of the city, a half block from Birdland, and there was an alley way leading from the musicians' back entrance into Charlie's Tavern. Charlie Parker used to come in and hang out, Zoot Sims, Kai Winding, Gene Krupa, you name it, and Bethlehem Records was right across the street from Charlie's Tavern and Birdland.

I would go down late in the afternoon and I could get a band together inside of fifteen minutes—you know, three horn players, a rhythm section, whatever—and talk about, "Why don't we do this thing (like Bud Powell's whatever he happened to be doing at that time)? Let's just go out to Rudy Van Gelder's and see what happens." If they didn't have transportation I'd get transportation, they'd come out, and sometimes they would get paid and sometimes they wouldn't get paid, I don't know, but the main thing was to get together. I could always get a group of players to come together and record. You think about the available recording facilities then, it was just a ball if they could get with a group to record. This was before there was any financial significance attached to the record business, really.

AAJ: What one piece of advice would you give to a young person who wants to grow up and be a record producer?

CT: I think you have qualify what he's going to walk into. In the first place, I think he's got to be a bit on the pushy side and walk in and say, "This is what I want to do. Are you interested?" Then have a plan; to walk in and say, "I want to be a record producer," "Oh, really? Okay..."

The people in the business have very little time, very little patience, with an untried person. This person really should be a player, it would help. And he should say that, "I've been listening a lot to so-and-so. And I think that I have the ticket to put him in an environment that would make him play like he's never been heard before."

It's just like any other business: If you're selling vacuum cleaners, it's, "Well, I've got the best one. It never wears out." "So let me try it."

AAJ: You are expanding your online presence at www.ctirecords.com these days, too?

CT: We need all the support we can possibly get compiling links to our internet presence because the competition is just so heavy. I am trying to build this website so that if a customer calls, I will certainly talk to any customer about the quality of whatever and why it's on the website, what we're doing now. Like you and I are talking.

I like to hear from customers and I'd like certainly to be very clear about the fact that this is the means of distribution of the jazz that I'm involved with now because the large companies are so consolidated—and continue to consolidate, if the BGM-Sony thing goes through, if the Europeans let them do it, I don't know if it's going to happen. But ask a guy on the street who is a jazz fan or whatever music fan, "Who has Verve Records now, do you know? Or who has Motown or who has A&M? Where is CTI? What is Sony?" 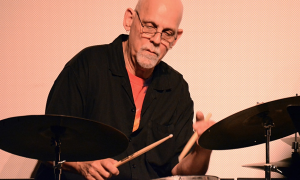