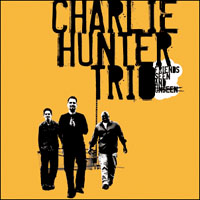 The prolific and ever interesting Charlie Hunter continues to change musical colors. For over ten years the unique guitarist has continued to produce releases that prove his talent and popularity. Some have hailed Hunter as the new crossover jazz prince who has attracted younger audiences with recordings such as last years Right Now Move and 2001‘s Songs from the Analog Playground which featured guest singers Kurt Elling, Mos Def, Theryl de Clouet, and pop sensation Norah Jones.

With music that is clearly open to the masses be it jazz or otherwise the guitarist is in a class by himself when it comes to technique. His claim to guitar fame lies in his ability to simultaneously play both bass and guitar parts on his specially designed eight-string guitar, which results in most of us asking, “How in the world is he doing that?”- A technique primarily used by Hammond B-3 players in which Hunter also produces organ-like sounds on his guitar. But his success lies not only in his ability but also in his choice of musicians that have been featured with the guitarist in various groups from duo to quintet formats.

The new recording Friends Seen and Unseen finds the guitarist going back to his roots in a trio setting. His last trio release was the landmark Bing, Bing, Bing released in 1995 which put the guitarist on map. Hunter’s new trio features the dynamic skills of saxophonist John Ellis and drummer Derek Phillips both from Right Now Move. The trio setting is naturally more intimate and allows the musicians to interact with a tight yet free style with music that should appeal to both long time and newer fans.

The new material is a well-rounded mix of styles that prove Hunter is more than just a jam-band guitarist. Hunter’s music has always been and continues to be about the groove. The opening piece “One For The Kelpers” features a funky vibe with Hunter’s bass strings laying down the slow cooked groove while “Freedom Tickler” introduces a freer melody allowing the trio to stretch things out musically with open solos. Never one to take himself too seriously Hunter adds both depth and humor on “Lulu’s Crawl” which could be the theme song for a sleazy Vegas strip tease show, with honking saxophone, guitar effects, and vivid drumming.

The trio members are up for the challenge and bring their own diverse styles to the music. Ellis is not only a fine saxophonist but also adds some nice touches with baritone sax and also strong flute work on “Darkly”. Derek Phillips also shines on “Darkly” with crisp drum work that is the glue to the recording as he provides expert timing and energetic kit work on every selection.

If Hunter is about the essence of the groove, he is also knows something about the blues. His unique take on “Running In Fear From Imaginary Assailants” has a delta blues feel as he incorporates wah-wah-slide effects and other touches as Ellis and Phillips join in on the fun. The very next selection “Eleven Bars For Ghandhi” seems to pay homage to guitar greats such as BB King and Buddy Guy with wailing notes and soulful phrasing.

With loose comparisons to other recordings there are familiar selections such the reggae themed “Soweto's Where It's At” which recalls 1997’s Bob Marley themed Natty Dread and “Moore’s Theme” which brings to mind 1996’s odd but special Ready...Set...Shango!. With a debatable marketing statement that states that this is Hunter’s best recording ever, the new recording clearly stands on its own and proves that the maturing guitarist still has that special something that keeps the music fresh, vibrant, and enjoyable.

Visit Charlie Hunter on the web at www.charliehunter.com .

Track Listing: One For The Kelpers; Freedom Tickler; Lulu's Crawl Darkly; Soweto's Where It's At; Running In Fear From Imaginary Assailants; Eleven Bars For Ghandhi; Bonus Round; My Son The Hurricane; Moore's Alphabet