By MARK SULLIVAN
September 29, 2016
Sign in to view read count 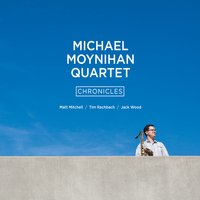 Tucson, Arizona is not the first place most people associate with jazz. But it's where saxophonist Michael Moynihan grew up, and the setting for his debut album Chronicles. He says "I try to incorporate the settings as an integral part of the music on Chronicles, and have selected all musicians who are based in Tucson or from there. The album was also recorded and mixed in the Old Pueblo." Having never been to Tucson, I can't say how well this music expresses that sense of place, but I can say that it is an exceptional debut. The recording was also supported by a successful Indiegogo campaign.

Guitarist Matt Mitchell is the harmonic anchor in the quartet, as well as the main soloist after the leader. He doesn't like to travel: otherwise he would surely be better known outside of Tucson. Bassist Jack Wood attended Rutgers University, then returned to Tucson. Drummer Tim Rachbach is a Tucson native currently attending the Manhattan School of Music. The leader graduated from the Arizona Jazz Academy (now the Tucson Jazz Institute), then attended the Jacobs School of Music at Indiana University.

The misleadingly titled "Weird World" opens the album with an atmospheric intro, leading into a gentle bossa nova. Nothing weird about it, but it's a lovely tune. It's a style that is especially well suited to Mitchell's fingerstyle playing. The sound recalls fellow fingerstyle electric guitarist John Abercrombie, and the modern harmonic vocabulary is also similar. The bossa feel suits the band so well that they revisit it on "December." For contrast, "The Pipe" has a fast, intricate theme, and provides Rachbach with a setting for a memorable drum solo.

The two ballads each have a distinctive sound. "Disorder" (another somewhat misleading title) features rhythmic repeated chords, recalling Herbie Hancock's iconic modern standard "Maiden Voyage," first recorded on his Maiden Voyage (Blue Note, 1966). Moynihan switches to soprano saxophone for "A Fib, A Lie"—yet another lovely piece that does not sound as bitter as the title suggests. The musical influence behind closer "Trane's Day" is right there in the title. It has a twisty "Coltrane changes" harmonic structure reminiscent of "Countdown," first recorded on John Coltrane's Giant Steps (Atlantic, 1960).

Moynihan displays real maturity in his playing and composing on Chronicles, and his strong band is right there with him all the way. Mitchell proves an especially apt accompanist and soloist; I would like to hear more from him. A very enjoyable album, with none of the tentativeness of some debuts.

Weird World; We Had A Great Time; December; The Pipe; Disorder; Opg Blues; A Fib, A Lie; Trane's Day.