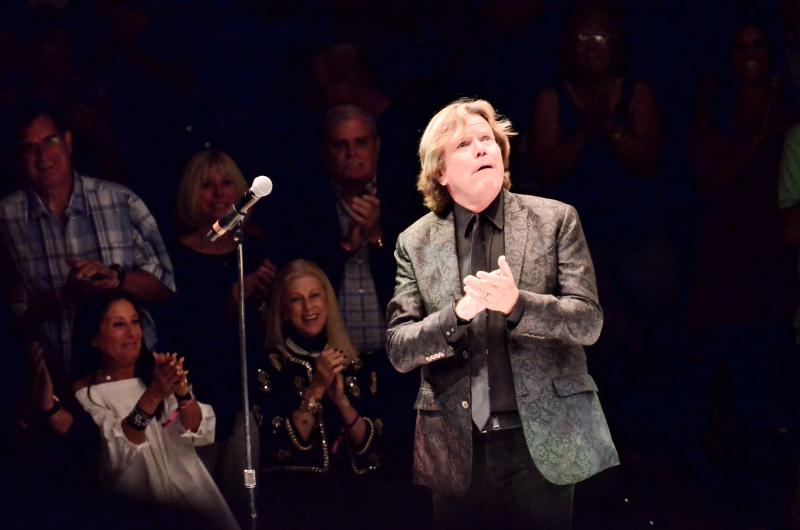 It was a night of nostalgic hits at the cozy NYCB Theatre at Westbury. Though the four bands that compromised the Hot Autumn Nights tour achieved most of their acclaim in the '60s and '70s, each still had a few tricks up their sleeves. Each band could still deliver the magic, or as Mark Dawson from the Grass Roots said, "Welcome to Rock 'n' Roll's version of the Senior's Tour."

The mostly middle-aged crowd was treated to an evening of hits which included: "Sure Gonna Miss Her," "This Diamond Ring," "Cry Like A Baby," "Soul Deep," "The Letter," "Sooner Or Later," "Two Divided By Love," "Midnight Confessions," "I'm Into Something Good," "Can't You Hear My Heartbeat," "Mrs. Brown, You've Got A Lovely Daughter," "I'm Henry the Eighth, I Am" and "A Hush All Over The World."

The evening started with Gary Lewis & The Playboys setting the stage by performing its early to mid-'60s rock and pop hits. In addition to the band's hits, "Sure Gonna Miss Her" and "This Diamond Ring," Lewis and his compatriots delivered strong versions of "Everybody Loves a Clown" (which was introduced as originally having been written as a novelty song for Lewis' dad, the famous comedian Jerry Lewis), "She's Just My Style" (co-written by Lewis and Leon Russell) and a nice version of Van Morrison's "Brown Eyed Girl" sung by the keyboard player, John Zender.

Next up on the intimate venue's revolving stage was the Box Tops. The Box Tops, formed in Memphis, TN, are probably just as much known for its former lead singer, the late Alex Chilton as it is for its hit songs "The Letter," "Soul Deep" and "Cry Like A Baby." The current incarnation of the band features original members Bill Cunningham on bass, organ and vocals and Gary Talley on lead guitar and vocals. Cunningham and Talley were joined by Rick Levy on vocals and guitar, Ron Krasinski on drums and Barry Walsh on keyboards. The quintet delivered a strong set of Memphis-influenced rock and soul hits that included the band's three best-known tunes plus "Cho Cho Train" (which Cunningham joked is referred by band members as "the transportation song"), "Neon Rainbow," as well as excellent cover versions of Booker T & the MGs' "Green Onions" and Albert King's "Born Under A Bad Sign."

The Grass Roots then stormed the stage. Comprised of a group of musicians hand-chosen by early member, the late Rob Grill, the Grass Roots currently feature Dawson on bass and lead vocals, Dusty Hanvey on lead guitar and backing vocals, keyboardist Larry Nelson and drummer Joe Dougherty. The high-energy set featured the first song ever recorded by the Grass Roots "Where Were You When I Needed You," "Live For The Day," "Temptation Eyes" and, of course, "Sooner Or Later," "Two Divided By Love" and "Midnight Confessions." One audience member was heard exclaiming, "I love them. They sound great, but really—almost every song is a stalker-song."

Following the Grass Roots, the evening's headliner, Peter Noone, hit the stage. Backed by the latest incarnation of Herman's Hermits (featuring original member Barry Whitwam on drums with Geoff Foot on bass, Kevan Lingard on keyboards and Paul Cornwell on guitar), Noone proved that not only was he still a very vital singer but a skilled comedian. As the night progressed, Noone, now just shy of his 69th birthday, danced, joked and sang with the vim and vigor of a much younger man. Among his best quips during his performance was: "Yeah, I love my songs!" and "We have a new album out and we're going to do eleven songs from the new album. The good news is that the new album is from 1967!" The most interesting quip of the evening was dropped just prior to singing "Jumping Jack Flash." Noone slyly noted that he was descended from rock royalty when he said, "My mother is Elton John and my father is Mick Jagger."

But it was Noone's singing and dancing that had the audience enraptured. In addition to the most well-known Herman's Hermits hits, Noone delivered spot-on versions of "Sea Cruise" (released on the 1965 MGM Records album Herman's Hermits, "For Your Love" from Herman's Hermits On Tour (MGM Records, 1965), Sam Cooke's "Wonderful World" (with which the band scored a number four Billboard Hit in 1965), "Jezebel," "No Milk Today" and "Dandy" (a Ray Davies song) from There's A Kind of Hush All Over the World (MGM Records, 1967), "A Must To Avoid" (a Billboard Top 10 hit for the band in 1965) and "Everybody's Got To Love Somebody Sometime." Noone also thrilled the audience with well-chosen covers of "Ring of Fire," "Love Potion #9" and "Daydream Believer."

Noone's show ended with four of his most beloved high-energy tunes. With the audience inside the fabled arena "in the round" on its feet singing along loud and proud, Noone closed with "Can't You Hear My Heartbeat," "Mrs. Brown, You've Got A Lovely Daughter," "I'm Henry the Eighth, I Am" and "A Hush All Over The World."

At the end, Noone thanked the audience for making the evening special for him. The audience responded with a standing ovation and cheers of both respect, idolization, and admiration. As the lights came up, the PA Announcer informed the audience that Noone would be out shortly to sign memorabilia and take pictures. As more and more audience members filed into the lobby, it was obvious that more were waiting for Noone than were leaving the venue.