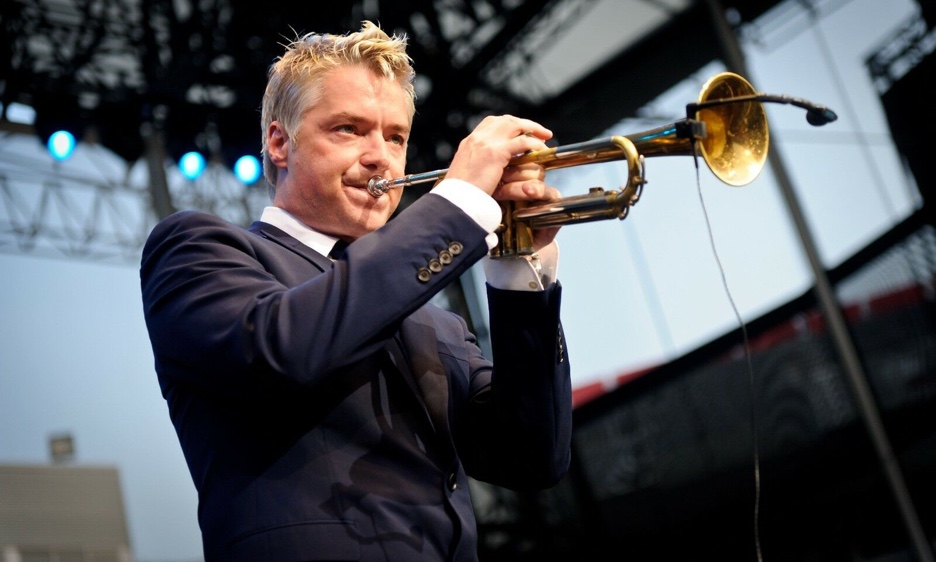 Miles Davis played Birth of Cool on one, Dizzy Gillespie had the bell bent upward on one, and Chris Botti has one, made in 1939. We are talking about the fabled early Martin Committee Handcraft #3 large bore trumpet, designed by a committee of symphony trumpeters to be simply the finest made. Davis had Committees made for him, even when they were not in production.

Botti's music was molded early in his life. His mother was a concert pianist, and he spent two years of his youth in Italy. Born in Oregon, he studied at Indiana University School of Music, and in his final year there, dropped out to join Frank Sinatra and later Buddy Rich for short tours. Botti recorded and toured with Paul Simon and Sting. He first recorded solo in 1995 and won his Grammy in 2013 for best pop instrumental recording with Impressions (Columbia, 2012).

Chris Botti came to Charleston where the 935-seat Music Hall was originally built by the South Carolina railroad as a whimsical passenger railway station in the antebellum period, outside it resembles a medieval castle.

Botti has a minimalist style of playing, the dark brown tonal quality of his Committee sending out a rich sound from the hand-hammered bell. Botti has transcended barriers between classical, opera, jazz, and pop music. Each of those worlds requires a different approach, but it's all music. To the jazz purist, the amount of electronic reverb used on Botti performances jangles, but it adds an overblown romantic element of haunting and distance for the popular market. His show structured around him like an old-style musical variety, a series of high-quality musicians rotating onto the stage to play two or three pieces with him.

They began with two ballads played in duet by Botti with the violin of Anastasua Masurok from St. Petersburg, Russia, also featuring Estonian pianist Eldar Djangirov who presented some fast and inventive runs. Then they went upbeat to their version of "When I Fall in Love" with an excellent improvised trumpet section and exemplary energetic drum work from Lee Pearson. Next came "Emmanuel," when the violin returned to the stage to lead them in. Andy Snitzer joined them on tenor saxophone for a sensitive muted trumpet rendition of Miles Davis' "Blue and Green," which the lighting engineer took as an instruction. Reggie Hamilton laid his string bass down and picked up an electric to open a fast version of "Moanin.'" Botti tapped his mouthpiece with a finger to tell the sound engineer to cut the reverb, and we heard the glorious sound of the trumpet, cleansed of electronic drama. The next vignette was a duet with Leonardo Amuedo from Uruguay, who spent many years playing with Ivan Lins in Rio de Janeiro. Amuedo favored a skeletal hollow body guitar for "You Are Not Alone" from the albumImpressions. Remembering the day in 2016 that David Bowie passed, Botti called "Hallelujah" and played the trumpet with a mute. Coming down into the audience, Botti played in clear, bright solo "Somewhere over the Rainbow" before inviting Wé McDonald to the stage to sing "For once in my Life," "The Look of Love," and Gershwin's "Embraceable You." Operatic tenor Jonathan Johnson using a microphone, sang "Con te Partiro" (Time to Say Goodbye), followed by "Nessun Dorma"(None shall sleep) from the opera Turandot where the Princess set riddles for her suitors, but would not say if they were solved until morning came.

At the end of this International musical extravaganza, they played out with "What a Wonderful World." The musicianship was faultless, they vaulted like gymnasts between classical, opera, jazz, and pop without the slightest trace of genre snobbery. The glitzy presentation was polished, but the amount of reverb could make teeth itch with its saccharine sweetness. However, this was an enormously popular, entirely professional collection of performances, masterminded by ever-youthful Chris Botti with impeccable timing.

The evening was still young, and Charleston has a new jazz club housed in a small former theater on King Street. Over a nightcap, owner Joe Clarke sang and played his Yamaha piano joined by Brett Belanger on bass and Stuart White on drums working their way skillfully through a list of standards. Forte Jazz Lounge is a convivial well-managed adventure; they deserve the support of their city.