Home » Jazz Articles » The Casimir Connection: Cause and Effect

The Casimir Connection: Cause and Effect

By Ian Patterson
October 21, 2019
Sign in to view read count 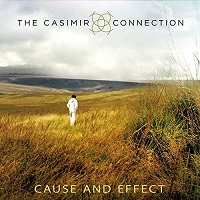 Though perhaps best known as a writer, arranger and leader of big bands, particularly the seventeen-piece Giant Steppes, saxophonist Diane McLoughlin is no stranger to the cut and thrust of small ensemble dynamics; the London-based musician plays with both the Alison Rayner Quintet and the Chris Hodgson Quartet. The Casimir Connection, however, is a different proposition; a new quartet, its debut release is a chamberesque blend of contemporary classical, Eastern European folk and jazz. McLoughlin's elegant and subtly layered through-composed pieces were inspired by her Yorkshire childhood and reveal a range of emotions stirred by memory, events and places.

McLoughlin is joined by three versatile musicians, violinists Pawel Grudzień and Kit Massey, and double bassist Tim Fairhill. The three are ideally suited to these hybrid soundscapes with their polyglot backgrounds in classical, folkloric and contemporary idioms. Grudzień doubles on piano throughout while Fairhill, of London Improvisers Orchestra fame, brings a spacious bottom end to proceedings. Unfortunately, soloists are not indicated on the album but suffice it to say the improvisations are uniformly strong.

One can almost imagine a thumping bodhran driving the melody on "The Secretive Irishman" as it moves from plaintive air to dashing jig. The absence of drums in the quartet emphasizes the melodic, harmonic and emotional contours by default, though there is rhythmic verve in much of the playing. This is particularly true on "Up on The Moors"—with its striding pulse and McLoughlin's feisty soprano that evokes swirling winds—and on "Torch Song," a dancing, Balkanesque baton exchange between violins. A tempest of a different kind drives "The Storm Inside," a dramatic and, in turn, brooding piece, where a violin stirs and buzzes like an angry bee.

Some of McLoughlin's most affecting music lies in her more introspective pieces, such as the elegant "Contemplation" and "A Lonely Child," the latter a beautifully serene meditation built on a slowly circling piano figure and plaintive melody. Here, piano and soprano saxophone leave contrasting impressions—the former of aching melancholy, the latter a yearning quality. There is an almost cinematic vein in McLoughlin's pen at times—in the repeating string and piano motifs of "Lost in Color" resides just a hint of Phillip Glass' architecture. Violins trade back and forth with verve on "A Day in a Polish Village 1933," the album's most overtly Eastern European-influenced number.

Like a great landscape painting, the music reveals its details, its many layers, with repeated listening and contemplation. With Cause and Effect McLoughlin's The Casimir Connection has tapped into a rich musical seam, one which could yet offer plenty more of this timeless, yet borderless music.

Eisenstein’s Theory; The Nurture of Nature; The Secretive Irishman; A Lonely Child; Up on the Moors; Torch Song; Nadya; Lost in Color; The Storm Inside; A Day in a Polish Village 1933; Contemplation.