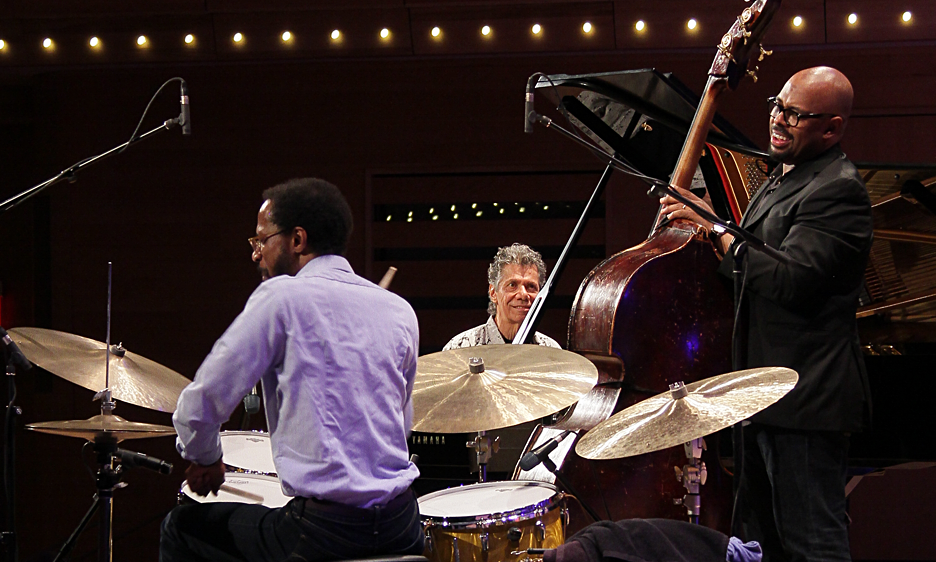 An all-you-can-listen-to two and a half-hour buffet was generously served up Wednesday night October 2nd, 2019 at the Balboa Theater in San Diego. Head chef Chick Corea prepared a tasty assortment of selections to be sampled and delightfully devoured throughout both courses of the evening. His sous chefs, Christian McBride and Brian Blade, brought their own seasonings and accoutrements to spice up the many decadent and sumptuous delicacies.

Improvisational jazz requires no recipe. The Chick Corea Trio, instead, relied on their robust talents, innate chemistry, and pure love of music to simmer, cook, and delight the sellout crowd. Corea has remarked more and more in recent years about what he refers to as the "fun factor." In a gloriously long, legendary, and brilliant career, he certainly has nothing left to prove. He has done it all. He has done it magnificently. Yet, he continues to do a balancing act, shuffling and working on a varied scope of projects simultaneously. Why? In a word, fun. It is his single most important criteria in choosing or denying what he devotes his time towards.

That said, it will come as no surprise that this evening's performance, while filled with mind-blowingly rich instrumental jazz, was also filled with smiles from both the artists and the audience. From the time they opened with elegant phrasing on Cole Porter's "You'd Be So Easy to Love" from 1934, the trio had us all in the palm of their very gifted hands. Two and half hours (sans a fifteen-minute intermission) glided past with moments of serenity and bliss. Mostly, however, the time was spent just flat out getting into some notes, grooves, rhythms, and improvisations that was food for the brain and coursed through the veins. We were treated to equal parts of Corea originals and his takes on other wondrous creations. Such as early in the performance when they joyously launched into Bill Evans' "Alice In Wonderland" from Sunday at The Village Vanguard (Riverside, 1961). Even the Mad Hatter had to be gleeful of this penetrating romp that captured the sonic interplay of Evan's epic trio vision of the Disney classic.

Thelonious Monk made an indelible impression on a young Corea back in the 1950's. So much so that much of his material would now seem "co-owned." Corea has much of Monk's spirit and intent inside of him. Fortunately, he let some of it "come outside and play." One great Monk tune begets another as "Work," the title track from Work! (Prestige, 1959) followed "Crepuscule with Nellie," first recorded for Monk's Music (Riverside, 1957). There is an empowerment of pleasure that he is able to share with the audience when he connects with Monk. These tunes served as playgrounds for McBride and Blade as well. McBride was smooth and appeared almost effortless in unwinding complex solos involving a flurry of notes and thoughtful passages. Blade is remarkable in that seemingly EVERYTHING he plays is in reaction to what his bandmates are playing. His ability to watch, listen, and react is beyond reproach. It's all about feel, not about technique.

I mentioned fun, which suggests humor. Yes, Corea has a great wit and sense of humor. Most of it falls under the "you had to be there" category. I'll take a shot at this one, though. He started to talk about a sonata. Being from the Boston area, Corea has a bit of that Bostonian accent going on. He pronounced sonata more like soNATTA. He laughingly clarified the Boston affiliation and intentionally went at it over the top with soNNATTTA. He was speaking specifically about the work of eighteenth-century Italian composer Domenico Scarlatti and soon was saying ScarLATTTI just for fun. He went on to say that Scarlatti had penned over five hundred sonatas. He paused, smiled, and said, "Well, I guess we will play one." That beautiful tune was morphed right into Corea's "A Spanish Song." A tune from the Corea/Steve Gadd project entitled Chinese Butterfly (Stretch Records, 2017). The seamless, and most impressive, manner in which they slid these centuries divided songs together led even Corea to comment on the accomplishment. This was stated as an acknowledgment of what he and his bandmates had done, not as in being impressed with himself. In fact, if anything one is to be impressed with just how much of a "regular guy" Corea is. Nothing pretentious whatsoever. A regular guy.....who just happens to be one of the top musical geniuses of all time.

A Corea show is above all entertaining, but it is also important to note that he manages to pay homage and give a clinic of substantial music history. In addition to the aforementioned works of Bill Evans, Thelonious Monk, Cole Porter, and a trip back to the eighteenth century, Duke Ellington's "In a Sentimental Mood" was offered in a nuanced arrangement that somewhere even the late great Sir Duke is smiling over. As much as Corea has moved the genre forward, he is deeply invested in the substance of jazz past. A few generations later came the genius of Stevie Wonder. "Pastime Paradise" from Wonder's Songs in The Key of Life (Motown, 1976) evolved into a cryptic and resolute jazz tune, broadening its scope while maintaining the inherent simplicity of its lines.

I hesitate to say that there was a show-stopper when the entire concert was so well received and played at such a high level. This audience was politely quiet and respectful throughout the evening. Pleasantly, there were zero whistles, hoots, hollers, or chatting to get in the way of the sound. The song that was momentarily welcomed most warmly is when Corea decided to return to forever. Deftly shifting their dynamic and versatile range into fusion, the trio erupted into "500 Miles High" from Light as a Feather (Polydor, 1973). All evening long McBride and Blade faced the challenge of playing tunes made famous by other high caliber bassists and drummers. Here they had the bass prowess of Stanley Clarke and the drum shoes of Lenny White to fill. They succeeded with aplomb. Partially because of their own well-honed skills and partially because of their intelligent approach. They didn't try to be Clarke or White or anybody else. They played the tunes in their own styles. They will never need to do anything more than that. Chick Corea could play with pretty much anyone he wanted to. He is meticulous and chose Blade and McBride for good reason.

"Fingerprints," Corea's hats off tribute to Wayne Shorter's famous minor blues composition "Footprints." Adam's Apple (Blue Note, 1967), deliciously closed out the second set. It was another well served entrée of indulgence that left you so very satisfied. Yet it was so tasteful you couldn't help but long for more. For their encore, Corea then wisely chose to offer us a smoldering hot cup of "Blue Monk," Thelonious Monk Trio (Prestige, 1954). It hit the spot like a steamy cappuccino, afforded one more glimpse into the Corea/Monk telepathic connection, and allowed the artists and the audience one last moment together to bid adieu.

The evening consisted of learned interplay and nourishing dialogue between the notes, always with preeminent servicing of the compositions at the forefront. Corea, however, is also artful in allowing time to breathe. This presentation enabled the listener to become fully invested and mentally encompassed into a live performance that was thankfully much like those brought forth on Trilogy (Concord Records, 2017) and Trilogy 2 (Concord Records, 2019) by this very trio. It was as exhilarating as it was enlightening. The trio is fueled by high-end combustibles, rhythmic unity, and extraordinary measures of improvisational inventiveness. It was surely a treat to behold. A feast fit for a king. The Chick Corea Trio unleashed a savory evening of jazz that embellished the legend and fulfilled the soul.