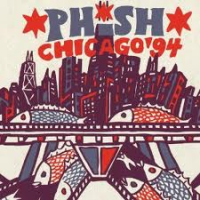 With the exception of the deservedly lavish package of The Clifford Ball (Rhino/Jemp, 2009), Phish has allowed its music to speak for itself on virtually all the group's archive releases. Chicago '94 follows suit, as this six-CD set—like the similarly conceived Hampton/Winston-Salem '97 (Jemp, 2011)—makes its statement through the largely brilliant musicianship contained therein, with virtually no accompanying content to place it in a historical perspective.

Chicago '94 evinces a continuity in the content with its sound check filler (a misnomer when workouts on Led Zeppelin's "How Many More Times" become functional in recurring teases), thus fully presenting a broad view of this band's evolution at approximately ten years past its original formation. The quartet takes much of both performances at the UIC Pavilion at the University of Illinois in Chicago at an absolutely blistering pace, as "Llama" opens the November show to illustrate how, without the pretention of progressive rock, Phish draws more than a little from that genre.

The abandoned joy with which they romp thru "Julius" and then into "Golgi Apparatus," to close the set, corresponds to Phish's arcane sense of humor and further distances it from the likes of Yes and early Genesis. As does the collective self-awareness illustrated by the inclusion of "The Mango Song" on both set lists: it's as if the group is deliberately courting its muse (not to mention fate or serendipity), in the hopes of matching, if not surpassing, the level of excellence it set in June .

Comparable momentum that continues unabated from that initial performance comes to a screeching halt in the second concert, with fifteen minutes of "Harpua," much of which is spoken word rather than instrumental. Comic relief might better have been provided via the somewhat tongue-in-cheek cover of Prince's "Purple Rain' and a short snippet of Argent's "Hold Your Head Up." Drummer Jon Fishman's a veritable whirling dervish behind his kit on "Run Like An Antelope," and only slightly less so during the encore of Jimmy Page and company's "Good Times Bad Times," where guitarist Anastasio's precise guitar work matches the feverish pace.

Summer, 1994 marked the point Phish began regularly recording its live shows—and rightly so, as the band had mastered the pacing demanded of such a forward-thinking approach. The delicacy of the quiet guitar interlude in "Divided Sky," for instance, serves an even greater purpose than the truncated take on "Dog Faced Boy" that immediately precedes this near-fifteen-minute number; it sets the stage for Frank Zappa's "Peaches en Regalia" as an overture to a blazing "David Bowie" that's emblematic of this show's overall power.

The childlike simplicity of Jim Pollak's cover art belies the extension of the graphic design to the inside of the individual disc sleeves, but this subtle approach to is fully in line with the music of Chicago '94 as it captures the imminent flashpoint of the group's creativity.