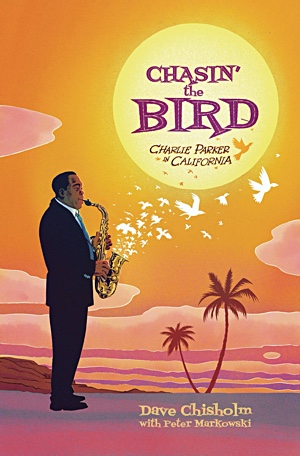 Bebop pioneer Charlie Parker came to California in December, 1945 to play alto saxophone in trumpeter Dizzy Gillespie's band at Billy Berg's Hollywood jazz club. Their reception was mixed, with many in the audience unable to embrace the bebop revolution. When the two month residency ended Parker stayed behind, extending his stay for two years. For this graphic novel biography musician/visual artist David Chisholm (creator of Instrumental (Z2 Comics, 2017), an original music/graphic novel project) focuses on this pivotal period in Parker's life, commissioned by the Charlie Parker Estate to celebrate the centennial of Parker's birth.

In life Parker was an elusive figure. Great as his achievements were, the legends loomed even larger (Kareem Abdul-Jabbar talks about this in his Foreword "I Hear.") Chisholm introduces the parable of the blind men and the elephant as a model for understanding Parker's life: everyone that knew him saw a different side. The book's structure reflects this, as each chapter (labelled Chorus, like a jazz solo) is told from the perspective of one of the significant people in Parker's life at the time. Chisholm goes even further, rendering each of them in a different art style which is intended to reflect the nature of the personal relationship.

Chorus 1 is devoted to trumpeter Dizzy Gillespie, probably the closest musician to Parker. He described his relationship to Bird as "my brother in every way but the biological way." This section shows the highs and lows of their relationship: Bird as a fellow virtuoso, an inspired playing partner; and Bird as an undependable junkie. Experienced comics readers may recognize the influence of cartoonist Alex Toth in the visuals, with his large areas of black ink. Dizzy returned to New York, and Parker stayed behind: his real California adventure began.

Some of the chronicles that follow have not been central to the larger Parker biography. Focusing on this specific period allows for the exploration of a variety of relationships. Visual artist Jirayr Zorthian is the first of these, an independent spirit rendered in the style of European comics. Bird met Jule MacDonald at a party there, and embarked on a love affair memorably illustrated in the surreal style of cartoonist Bill Sienkiewicz. A brief encounter changed saxophonist John Coltrane's whole career trajectory. 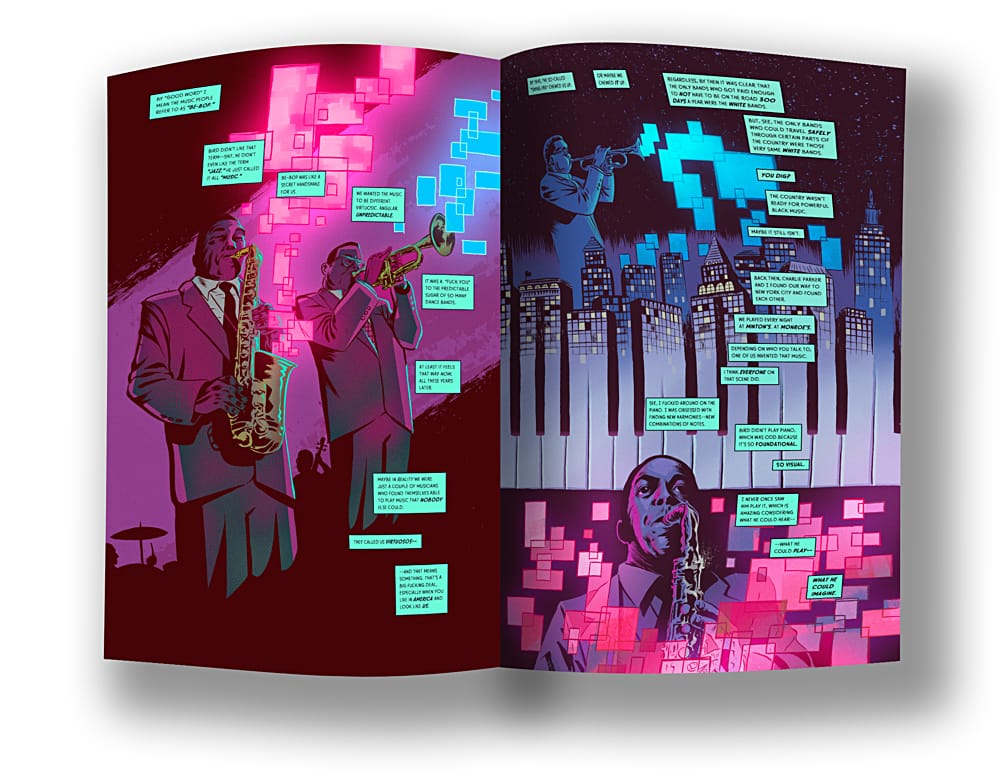 Photographer William Claxton met Parker before he became known as a jazz photographer, but once again the saxophonist's charisma changed another person's life. Claxton provided Bird a calm oasis in the suburbs: Chisholm portrays his interest in photography with a simple repetitive panel layout. Record store owner Ross Russell has the final story. Transfixed by hearing Parker live, he sold the store and established Dial Records, just to record him. This makes him an unexpected partner in Parker's life as well, which included securing his release from the famous mental institution Camarillo (immortalized in Parker's composition "Relaxin' at Camarillo"). Late cartoonist Darwyn Cooke's distinctive noir style is evoked to great effect in this section.

The book closes with an Outro, a stunning visual representation of Parker's saxophone playing at the peak of his powers, depicting his musical notes as birds in flight. And a final legend: a group of hipsters swore they saw Parker walk on water as he played by the ocean at Santa Monica. A nod to Bird's legendary musical prowess as well as Bird the legend, it ends the story on a high note which would not have been possible in a full biography. Chisholm humanizes the story with dialog from actual Parker interviews. And while he does not ignore Bird's darker side, his conclusion is thrillingly upbeat, evoking the musician at his most inspirational.