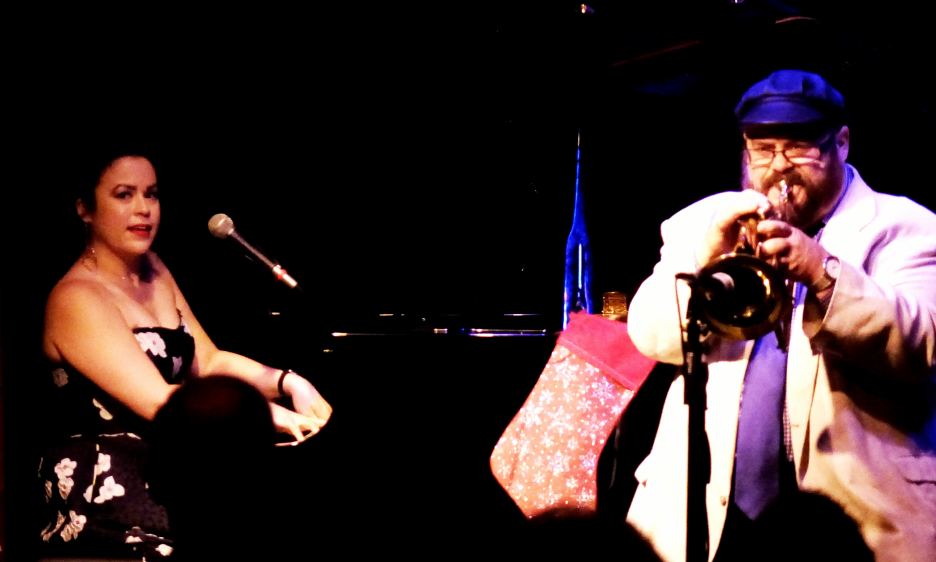 By the time Christmas comes around, those old seasonal songs are worn out. They are exhausted by overexposure in elevators, shopping malls, and streamed everywhere for a whole month of every year.

In complete contrast, a breath of sharp, fresh air breezed into The Jazz Corner, when charming Champian Fulton dropped into Hilton Head island with her quartet. They stopped on their way from Orlando, FL to New York City to hang her special sparkle onto the Christmas music tree. She began playing piano and by singing Cole Porter's "It's Alright With Me " at a brisk pace accompanied on his Olds flugelhorn by a gentleman whom she playfully described as her brother. He was her father, Stephen Fulton. They moved on through "Day by Day" the title a pun on the 1956 release by Doris Day, until they reached "I'll be Home for Christmas"( if only in my dreams) a Bing Crosby hit from 1943 when soldiers wished they could be home from the battlefields for Christmas. The Olds flugelhorn is known for its big sound, and it ended the tune with a bluesy phrase. Champian remembered  childhood family Christmas in Houston and questioned the lyric "Presents on a tree." She answered her question supposing the gifts to be small enough to hang on the tree—like jewelry. They moved through "Winter Weather" and on to their arrangement of "All the Things you Are." Stephen called "Days of Wine and Roses" and set off with the flugelhorn pooling rich sounds around him to be joined by the piano, then the drums of Fukushi Tainaka who picked up the rhythm and rattled the "Jingle Bells" theme briefly on cymbals during his solo. The 1930 standard "Body and Soul" was a perfect fit for Champian's voice, modulating from breathy at the top end to commanding in the mid-range. They closed out the first set with a swinging, peppy version of "Winter Wonderland."

In conversation with Champian at the break, she revealed that her plans for 2020 include a European tour through London and Paris into Germany and on to Norway, Sweden and Denmark. She also plans to record a tribute to Charlie Parker in his centennial year. The album title will be Birdsong and not surprisingly, it is rumored it may debut at Birdland on 44th Street in New York City. She revealed a particular affinity for Parker's music, which was played to her before she was even born. Her father nodded in confirmation, with a wry smile. Asked about her achievements through 2019, Champian replied she was most proud of her album Dream a Little... (Cellar Live, 2019) currently charting around the top ten, and also about finally passing her driving test allowing her to practice her skills on this road trip. In spite of a chill evening, she met her audience and signed CDs outside wearing an A-line black and white summer dress with bright red heels, sparkly enough to fly to Kansas if they were clicked together.

They began the second set with "White Christmas," a video of which is shown below from her Christmas with Champian album (2017). The song was written in 1942 by Irving Berlin, Bing Crosby made the single an all-time hit. They followed on with the torch carrying song, "I Cried For You" (Now it's your turn to cry for me) brushed along by Tainaka as an upbeat ballad. Two tunes popularized by Billie Holiday ran together "Me, Myself & I" from 1937 was followed by "He's Funny that Way."

Fulton sat at the piano with a straight back and played in her unique style. Taught to play by her paternal grandmother, Champian went straight to jazz at an early age. She played big full chords vaguely reminiscent of Erroll Garner's rolling, romantic style, highly polished and practiced. They continued on with, " I Didn't Know what Time it Was." Together they flew at Oscar Peterson's album title track "Blues Etude" roaring along to two consecutive false stops and a sharp finish that bought smiles to the room and grand applause. They finished their performance with a blues question "What are you doing for New Year's?"

The level of style, versatility and sheer vocal and musical quality was a thing to hear. There was no setlist, but each of the songs was thoroughly rehearsed and joyously delivered.