By Jakob Baekgaard
September 4, 2016
Sign in to view read count 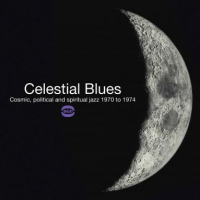 When saxophonist and composer, Kamasi Washington, released his tripple album, The Epic in 2015, it was celebrated widely, not only in the spheres of jazz, but also in rock magazines. Washington was clearly on to something, forging a new spiritual sound that married world music, orchestral funk and free jazz.

However, new sounds do not come out of nothing. Music is always born out of or into a tradition. The compilation Celestial Blues: Cosmic, Political and Spiritual Jazz 1970 to 1974 tries to trace the influences that led to the Epic and does so quite successfully.

The album is conceived by the accomplished compiler and DJ, Dean Rudland, who has also written the excellent notes that accompany each track. The selection includes a wide range of artists, including saxophonists Gary Bartz, Carlos Garnett, Joe Henderson and Azar Lawrence, drummers Roy Brooks and Joe Chambers and pianists Hampton Hawes and Bayeté Umbra Zindiko. What they all have in common is that they were trying to break out of the mold of traditional jazz and adjust themselves to the electric, experimental spirit of the 1970s while keeping a close tie to the virtues of jazz: improvisation and the polyphonic approach to rhythm and melody.

For instance, it is fascinating to hear Hawes, the accomplished modern bop pianist, delve into the spacious sounds of the electric piano on "Josie," a groovy, bubbling piece with a rain forest of percussion, creamy electric bass, wahwah blues licks and punctuating horn lines. A transcendent approach to the instrument comes from Azar Lawrence who seems to blow into heaven with his throaty saxophone sound on "Warriors of Peace" that takes off with Latin rhythms and razor sharp rhythmical breaks. Joe Chambers on the other hand conjures a whole world of tribal rhythm on "The Alamoravid" and the liquid sounds seem to flow effortlessly from the organ, Moog and ARP synthesizers of Charles Earland.

Simply put, Celestial Blues: Cosmic, Political and Spiritual Jazz 1970 to 1974 is a fun journey into a strange and funky world of sound, both celestial and bluesy. It is an album that encourages further crate digging, but it also stands as a perfect proof of the saying that the past is just as cool as the future.

A note: The booklet also includes several scans of album covers. Let it be said that the cover art was just as colorful and eclectic as the brilliant music inside the sleeves.