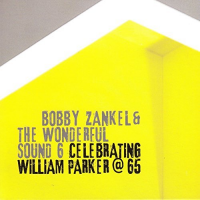 This recording is of a live concert at the Painted Bride Arts Center in Philadelphia on January 21, 2017 to honor bassist William Parker on his 65th birthday and in which he served as bassist. Saxophonist Bobby Zankel composed, arranged, and led a four part Suite with Parker's influence in mind and which allowed ample room for free improvising while providing enough structure to give the music ample flow and form.

William Parker is a true giant of jazz. He is a remarkably resourceful bassist, composer, and arranger, a prominent musician in the New York City experimental jazz scene, and a powerful force who has had a lasting impact as a performer as well as in the humanitarian message he conveys in both his music and his social commitment to world peace and freedom. He first came to public attention with pianist Cecil Taylor (The Eighth, HatHut, 1986; Winged Serpent (Sliding Quadrants), Soul Note, 1987). He has long been a member of saxophonist David Ware's quartet and in Peter Brötzmann's groups. He is a member of the cooperative Other Dimensions In Music and co-organizer of the annual Vision Festival in New York City.

Bobby Zankel's "Wonderful Sound" materializes here as a pared down ensemble drawn from his state of the art big band that can push the envelope of avant-garde jazz to the limit, but retains the pulsating rhythm, phrasing, and blues origination at the heart of the music. In addition to his saxophone artistry, Zankel is a genius of composing and arranging who is able to let the individual musicians go wherever they want while retaining a coherent structure and development conveying soulfulness and beauty. At times, he invites a guest artist to provide an additional perspective. In this live recording, the guest performer is the legendary bassist Parker, and the band consists of Zankel, Parker, and four other musicians with exceptional technical virituosity and musical imagination who explode jazz into its farthest reaches. With Steve Swell on trombone, Diane Monroe on violin, Dave Burrell on piano, and Muhammad Ali on drums, we have an ensemble who can do virtually everything. And yet they are sufficiently in synch with one another to create an organized totality of high artistic order.

Zankel's "Suite" dedicated to Parker is organized in four un-named parts and only suggestive thematic material, thus allowing for spontaneous combustion and creative freedom. Part 1 begins with Zankel echoing Ornette Coleman and the band taking over with intense, dynamic collective improvising reminiscent of John Coltrane's Meditations. It is avant-garde jazz at its best, with a hidden beauty that emerges from a concatentation of complex sounds like a white-water river rolling over rocks and fissures. Part 2 is a postscript to Part 1 in which Zankel gives ample space for knockout solos by Monroe and Burrell. Part 3 consists of a short melodic motif that is modified in subsequent choruses throughout and in which, towards the end, Parker takes a mostly arco (bowed) bass solo to die for, surely one of most remarkable upright bass improvisations you are ever likely to hear. In Part 4, Parker's bass states a kind of blue post-bop line. The ensemble joins in, and Zankel swings on alto saxophone against a riff. The rhythmic arrangement combines swing with Thelonious Monk's stride- influenced syncopations.

This CD represents the best and most accessible of avant-garde music. For the uninitiated, it is a great way to "get into" a genre that may be unfamiliar to them. And serious aficionados would do well make it part of their collection.