By Jerome Wilson
December 14, 2017
Sign in to view read count 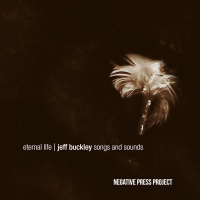 There are few people in music who have become more famous through a very small body of work than Jeff Buckley. At the time of his death by accidental drowning in 1997, the singer-songwriter's recorded legacy consisted of one live EP of cover tunes and one studio album, Grace. Nevertheless his multi-octave voice and the ethereal rush of his songs have touched a lot of people. There's been a film and several books about him, several people have covered his songs and his version of Leonard Cohen's "Hallelujah" has become a classic. Now the Bay Area group Negative Press Project has recorded an entire CD paying tribute to Buckley in Eternal Life.

The CD covers every song on Grace except "Hallelujah" and adds two originals by the group's leaders, pianist Ruthie Dineen and bassistAndrew Lion, that reflect on Buckley's life and legacy. The music tries to capture the floating sensuality of Buckley's sound. It doesn't have his greatest asset, his remarkable voice, but Dineen's piano and Lyle Link's tenor follow his undulating melodies closely.

Actually there are times when these versions follow them a bit too closely and have little variation. Happily there is also more creative interpretation throughout the set such as intense guitar improvising on "Last Goodbye" by Luis Salcedo, a powerful solo bass version of "Lilac Wine" by Lion and light gospel piano by Dineen that sets a swaying, countryish mood for a "Lover, You Should've Come Over" that also features soulful tenor and twangy guitar.

The two original compositions bookend the Grace tracks. Lion's "Wolf River," named for the river where Buckley drowned, is a dark but lush tone poem with woozy slide guitar, insistent piano chords and moody trumpet by Max Miller-Loran. Dineen's "Anthem" has trumpet and sax weaving and soaring around each other over a subdued but attractive rhythm section. There's little real improvisation in this but it's still lovely music.

There's an additional EP in this package that contains an instrumental treatment of a song Buckley loved to sing live plus vocal versions of three of the Grace tracks. The group's version of "The Man That Got Away" is the most purely jazz track of the entire tribute with Chris Sullivan's alto singing prettily above Dineen's halting piano. As for the actual Buckley songs, Jeff Campbell's singing on "Lover" is soothing and soulful but he's somewhat overwhelmed by the horns while Mia Pixley is strong and effective on the billowing surge of "Eternal Life." Jeff Denson does the best of the vocalists, daring to sing the delirious "So Real" in a swooping tenor much like Buckley's own and providing some of the most thrilling minutes of the entire project.

If you have never heard Grace, you should really do that first to find out what all the fuss was about. If you know that record, you can really appreciate what a heartfelt and sensitive tribute this CD is to Jeff Buckley's dreamlike art.