Advertise
9
Catching Up With

Joe Magnarelli: On Three On Two 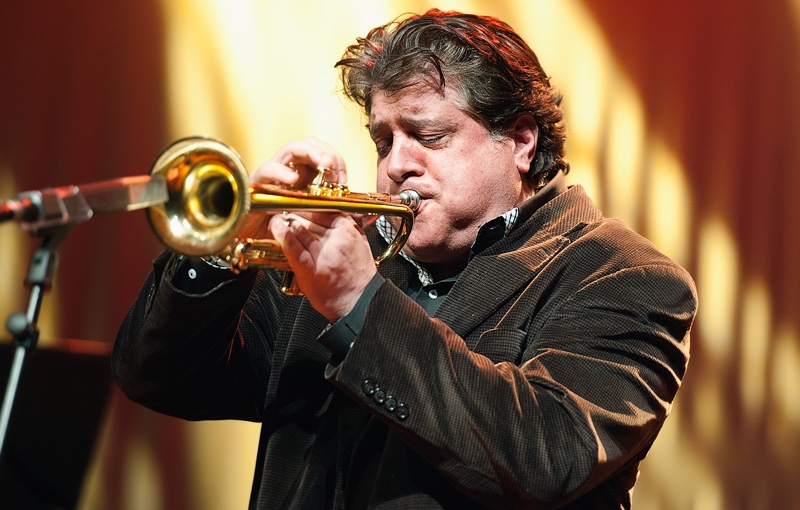 By Nicholas F. Mondello
August 11, 2015
Sign in to view read count
Trumpeter Joe Magnarelli is and has been one of the most respected jazz players on the jazz scene for years. A native of Syracuse, New York, "Mags" has recently returned from a critically well-received European tour and has just announced release of Three On Two for Posi-Tone Records.

All About Jazz: Joe, on behalf of All About Jazz, thanks for taking time to speak with us today and catch up.

Joe Magnarelli: Thanks, Nick. It's my pleasure.

AAJ: Please tell us about your new release, Three On Two.

JM: Well, it's my second recording for Posi-Tone. Mark Free is the producer. He invited me and picked the band and we recorded it in September. Everyone was excited and in good spirits and it's out this week.

JM: Rudy Royston is playing drums, Brian Charette is on B3, and Mike DiRubbo on alto and Steve Davis on trombone are the frontline.

AAJ: What's the material on this date?

JM: I've got a couple of original tunes—a couple of funk tunes and a couple of straight-ahead tunes. I love John Coltrane, so I recorded "Central Park West" and "26-2." Steve Davis and Mike both brought an original to the date. We also did a Cedar Walton tune—ten tunes all together.

AAJ: Your last album for Posi-Tone, Lookin' Up was a hard bop session. Is Three on Two the same?

JM: Yeah, I guess that that's sort of my "thing." I really wasn't going for a certain style, but, it seems a lot of my records come out like that. But, it's a little different feel because of the because of the organ and Rudy—he been more influenced by Jack DeJohnette and Tony Williams, more than most drummers. The record may sound less hard bop.

AAJ: Bobby Shew told me there's a lot of Kenny Dorham in your playing. You know, I think you're playing better than ever.

JM: Thanks. Yeah, when I was about 22 or 23, I really got into some Kenny Dorham recordings and that lasted for years. I know he played with Bird and he did a lot of studying of Bird's music. So, I guess my connection with Kenny there is that over the last ten years I've been studying and dissecting lot of Charlie Parker's music. But, yeah, I guess I fell in love with Kenny's sound and probably still occasionally revert to that. That's closest to my heart.

AAJ: You just returned from playing in Europe?

JM: Yeah, I did a thing in the Canary Islands with a great saxophonist, named Chris Cheek. Then I flew to France and played a few gigs there with Louis Hayes; then to Bologna, Italy for a few gigs. I'm going back over there in a few weeks.

AAJ: I know you do a lot of playing in Europe. Do you find the audiences different there than here?

JM: You know, most of my playing is here in New York and the audiences are great. Having said that, I'm sure if you really look at, though, at least half of the audiences here are European or Japanese tourists. You do feel energy here. But, anywhere you go in Europe, you're going to find a nice crowd that's educated about the music. Here, unless you go to the schools, it's harder to find that audience. That's my experience.

AAJ: Please tell me a little about your interaction with the other musicians on this recording. Had you worked with them before?

JM: Well, I met Rudy Royston at the rehearsal, I played a couple of gigs with Brian Charette. As far as Steve and Mike, I'd done a number of things with Steve and Mike, although I haven't worked a lot with him, he's is my next door neighbor. So, I'm very close to Mike. But, having said all that, coming together for a recording like this in this day and time, where it's a different industry now. Things are different. When a guy calls you up and says, "I want to record you and here are the musicians and the details are set ," and you show up with the guys, there's a new energy there. Everybody's into it. There's no negativity. That carried through on this recording in the rehearsal and on to the date. Everybody was really prepared and up for the music, the vibes were good. As the leader, I have to set the tone, you know. Marc was cool about things.

JM: Yeah, Marc said "if you make a mistake, don't sweat it." Some of the greatest recordings I own, like Miles Davis and Clifford Brown, there are mistakes on those records. And, those are my favorite records of all time. So, when you record, just play. Over the course of the day, there'll be a lot of beautiful things that come out of us. Just play. On a session like this—with one rehearsal and into the recording—you have to come in and create some atmosphere. No negative vibes.

AAJ: Are you doing any work on your own in New York?

JM: Yes, not film or commercial work. But, I will play as a sideman if somebody comes in to town; do a big band thing. That type of stuff.

AAJ: You know, Joe, you're an "Upstate Burner." You know what that means?

JM: Ha! That's the ultimate compliment to a Cat from Syracuse!

AAJ: Is there anything else we should cover about the new record?

JM: No, I think we've covered it. We hit it hard and we wish it the best! Hopefully, the word will get out about it. That's what it's all about. So, we'll have more chances to play and write music. And, to get better.

AAJ: Well, this has been great and a great place for that to start. Good Luck with Three On Two and all your future work. On behalf of All about Jazz, Thanks!