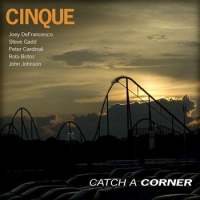 With legendary drummer Steve Gadd and organist Joey DeFrancesco in the lineup, and a clutch of Canada's top session men rounding out the personnel on Catch A Corner, Cinque gives a tip of the hat to the CTI label and its particular style of relaxed—but not smooth—jazz-funk. Olivia Cardinali's vivid cover photograph seems reminiscent of Pete Turner's work for Creed Taylor's '70s-era label. Memories of pianists Bob James and Richard Tee are effortlessly conjured by the dual keyboard work of Robi Botos on Fender Rhodes and DeFrancesco on Hammond B-3.

Gadd, whose versatile swing/funk drumming was featured on dozens of jazz and funk recordings throughout the '70s, is right at home here. He hasn't lost a thing over the last few decades—he's as sharp and as inventive as ever. Botos has the mellow soul-jazz thing down pat, and demonstrates how it's done on "Conflicting Advice," the CD's slinky, urbane opener. Saxophonist John Johnson, a first-call session man in the Toronto studios, has a big warm tenor sound reminiscent of Houston Person and Stanley Turrentine, and his overdubbed horn section on "Saturday Night, Sunday Morning" sounds like something from one of Gadd's old Stuff records with Richard Tee and Cornell Dupree.

The feel on Catch A Corner is super-tight, yet really spontaneous. DeFrancesco, a flashy and energetic soloist who, at first glance, doesn't really fit the laidback jazz-funk mold, might seem to be the odd man out here. However, the band's repertoire—assembled on-the-spot during the recording session—includes a number of pieces suited to DeFrancesco's hyperactive Jimmy Smith-inspired style. These tunes hearken back to the early- to mid-1960s, the heyday of the Hammond B-3 combos led by players such as Smith, Jack McDuff and Jimmy McGriff. DeFrancesco really lights up "Gepetto's Blues," a hot serving of basic grits 'n gravy blues, and comes barreling out of the gate with some big thrills on "Over The Humpty Dump," a hard-charging jazz waltz. DeFrancesco also proves to be a consummate team player, providing, for example, an endless array of slick and swinging fills behind Botos and Johnson on the gospel- drenched second half of "Saturday Night, Sunday Morning." Botos' Rhodes work here also makes a particularly good impression—he's a true soul-jazz keyboardist in the vein of Horace Silver and Cedar Walton.

The appeal of Catch A Corner lies in the abilities of these five musicians to find a freshness in some very basic and familiar- sounding material. They are hugely successful in that regard; the playing here is excellent and inspired throughout. While some of the music may be a bit too mellow and easygoing for some, those who enjoy slinky '70s jazz-funk and '60s organ jazz will find Catch A Corner a veritable treasure trove.