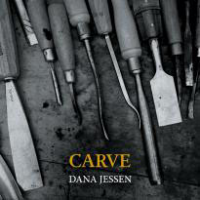 The bassoon rarely makes an appearance outside of the orchestral setting though it has found a place in jazz recordings dating back to Paul Whiteman and much later with Chick Corea. The instrument is considered one of the most difficult to play but its natural range and dynamics are far-reaching and versatile. Add in electronics and extended techniques and you have a unique instrument going beyond its already exceptional array. That is what Dana Jessen has delivered on Carve, an inventive an unusual album of original works and those of several modern creative music composers.

Jessen is a busy contributor in the chamber music genre, as well a soloist and impressive improviser. She is the founder of Splinter Reeds, a reed quintet, and has performed with Anthony Braxton's Tri-Centric Orchestra among many other groups. Jessen holds advanced degrees in Bassoon Performance from the New England Conservatory of Music and Improvisation from the Artez Hogeschool voor de Kunsten in the Netherlands.

Carve opens with "Of an Implacable Subtraction," a darkly melancholy piece from the innovative composer Paula Matthusen, its odd meters and multiple layers adding an unexpected fullness to the instrumentation. At times, "Fireflies in Winter" sounds more like foghorns in the harbor but as it builds, Jessen's vision comes to fruition with remarkable clarity. That depth is replaced with an emphasis on technique, on the brief title track which features Jessen playing the reed only. High pitched and oddly organic, it is the top of the roller-coaster to the subsequent "Cadenza & Degradation." The title track is presented in three additional variations including bassoon, without reed and bassoon with teeth. At more than thirteen minutes in length, the Kyle Bruckmann composition plays out in the lower register of the bassoon; a dark, eerie melody augmented by lacey effects floating almost out of earshot and Jessen providing her own bass effects. The bassoonist later rivals Peter Brötzmann's tenor with an unanticipated and menacing growl.

For those who appreciate unusual applications of familiar instruments—such as the accordion techniques of Pauline Oliveros or the solo soprano saxophone experiments of Sam Newsome— there is that element of surprising improvisation in Jessen's work. Far from being a novelty recording, Carve is an eye-opening experience in the ways of an underutilized instrument. Jessen's virtuosity, and selection for this program, make this an intriguing listening experience.