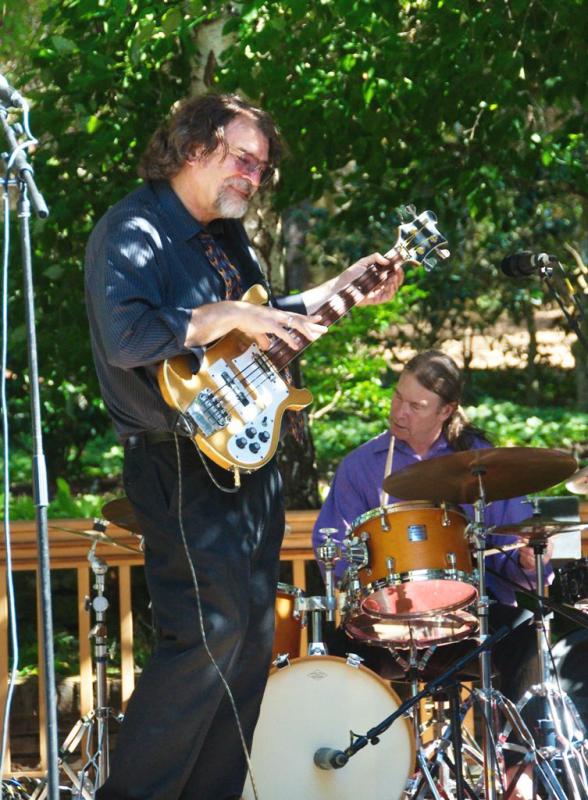 Six hundred fifty people streamed onto what had years before been a tennis court converted into an outdoor concert setting at the early 20th Century Filoli Estate, just south of San Francisco, California. Add to that the 50 volunteers and there were 700 people listening to the final, sold-out jazz concert of the season to hear the Brubeck Brothers Quartet. Accompanying the Brubeck brothers—Chris Brubeck on electric bass and trombone and Dan Brubeck on drums—were pianist Chuck Lamb and guitarist Mike DeMicco, who rounded out this well known quartet often lovingly referred to as BBQ. The musical backbone for the day drew from some of the late Dave Brubeck's compositions and as expected, performed in varying time signatures. When asked whether they had ever played there before, Chris replied, "That was the first time we ever played Filoli, but I'd heard about what a great venue it was from other musicians over the years. It was an idyllic spot to make music; about as good as it gets in many ways."

There was no doubt about it that these four gentlemen had played together for years. From the opening bars of "Bossa Nova U.S.A." (written by Dave Brubeck in 1963) the quartet showed their years of experience, as they were as tight as any four musicians can be. Chris Brubeck opened on his electric bass, while his brother Dan laid down a Latin rhythm via Rio de Janeiro on his snare and cymbals. Meanwhile, as Chris eased off on his bass, DeMicco came in, quick-fingered, and fired up on his guitar. His fingers virtually flew along those strings. At the same time, over on the piano, Lamb worked the mid-section of the keyboard and gave the tune its innate swing. Almost unnoticed by the audience, DeMicco and Lamb settled back while Chris Brubeck took the featured spot and Dan Brubeck hit those sizzling cymbals and rapped on his open snare with Latin rim shots. They wrapped up the number with Lamb climbing the keys, and then the quartet finished it off.

During the second set, the quartet played a piece Dave Brubeck was inspired to write after a remark of Ella Fitzgerald's, entitled "My One Bad Habit Is Falling in Love." Dave thought that would be a natural for a song and so it was, but instead of singing the piece, Chris "played the vocals" through his trombone and while he played, one could almost hear the words ..." and falling right out again." Lamb led the tune as Chris came in on his trombone, easy, laid back, lilting at times, a slow dance piece. Later he commented about the Filoli audience, "They were enthusiastic and friendly and listened when they weren't dancing, which was a novel and entertaining twist." And so it was.

The quartet wrapped the late afternoon concert with "Take Five," composed by Paul Desmond the only number in the quartet's playlist not written by Dave Brubeck. The head was the usual beginning of the piece in order to establish the setting, but it didn't hang in there for very long before the quartet twisted it, turned it, improvised over the top as well as beneath, taking it and the audience out on a fascinating journey through varied time signatures. It began strong and then settled into DeMicco's easy guitar with Dan's smooth drums, keeping time in the back. As Chris Brubeck's bass came in, DeMicco picked up the tempo. They played off each other for a number of bars until Chris and Dan took it and played off of one another, calling back and forth as though having an intense conversation. It was a long solo, until Dan crashed in and took the lead, sticks flying over every drum in his set and the bass drum pounding out that all-knowing time. A monster solo to be certain, which led Chris, DeMicco, and Lamb back into the piece where they picked up with the familiar "Take Five" signature that rounded out the end.

With that, the audience rose to their feet, applauding and applauding, with some calling, "More, more." The band looked as though it was going to leave the stage as Chris released the bass strap, Dan stood, DeMicco put down his guitar, and then there was that inevitable regrouping, coming back out, and Chris announced their encore "Unsquare Dance." Later, he said, "[It was] an unrehearsed encore as an extra thank you to a great audience" in a stunning setting in the middle of the world famous gardens at Filoli.