Composer, orchestral arranger, lyricist and performer, Christopher Brubeck is equally at home playing jazz, rock, classical, funk and folk music, displaying his multiple talents on three instruments. An award-winning composer, Chris has been called “…a 21st Century Leonard Bernstein” by John von Rhein of the Chicago Tribune. Chris’s composition, “Vignettes for Nonet,” for woodwind quintet and The BBQ was commissioned by, and premiered at Bay Chamber Concerts, Rockport, Maine in August, 2003 to great acclaim. Since its premiere Vignettes has been performed by many woodwind quintets, including the Russian National Orchestra Woodwind Quintet

Chris Brubeck at the Bechtler Museum of Modern Art

Chris Brubeck Bechtler Museum of Modern Art Jazz at the Bechtler Charlotte, NC October 4, 2019 The “Jazz at the Bechtler" series celebrates its tenth anniversary this year, and next year is composer/pianist Dave Brubeck's centenary. So it is appropriate that Dave's son Chris was the special guest for a ...

Duke Ellington, Louis Armstrong and Dizzy Gillespie had gone before him as Eisenhower's jazz ambassadors for America, when pianist Dave Brubeck--along with his sizzling quartet comprising alto saxophonist, Paul Desmond, drummer Joe Morello and bassist Eugene White--set out on their 1958 State Department-sponsored tour. The group gave around 80 official performances across 14 countries, taking in ...

Chris Brubeck and Dan Brubeck are extensions of a remarkable jazz legacy. Although they toured and recorded with their father extensively, the immensely popular and influential jazz innovator Dave Brubeck, Chris and Dan have forged their own musical identities. Bassist and trombonist Chris and drummer Dan have previously released four albums with their band Brubeck Brothers ...

This album by the Brubeck Brothers--led by Chris and Dan Brubeck, sons of legendary pianist Dave Brubeck--commemorates the 60th anniversary of “President Eisenhower's Special International Program for Cultural Presentations," the 1958 State department tour in which prominent jazz musicians traveled to 14 countries to give 80 concerts in 90 days. This grueling schedule was endured by ...

Brubeck Brothers QuartetFiloli EstateWoodside, CaliforniaAugust 23, 2013Six hundred fifty people streamed onto what had years before been a tennis court converted into an outdoor concert setting at the early 20th Century Filoli Estate, just south of San Francisco, California. Add to that the 50 volunteers and there were 700 people listening ... 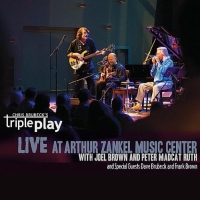