Bobby Zankel,The Warriors of the Wonderful Sound, and Guest Saxophonist David Murray at the Painted Bride 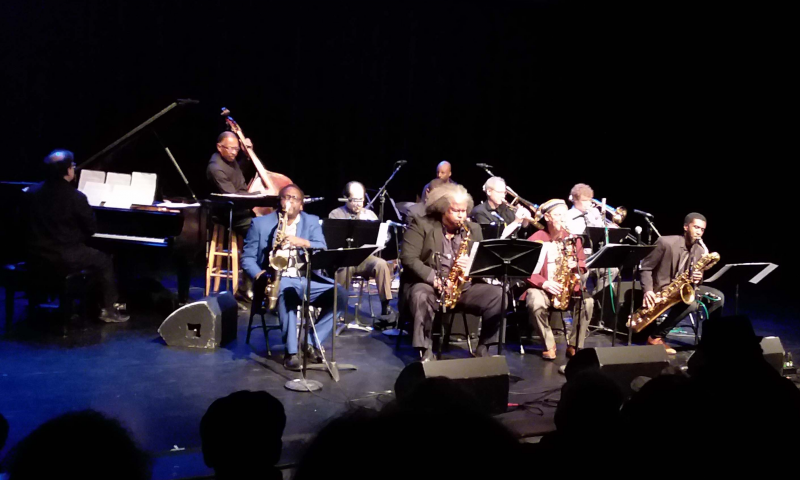 The Warriors of the Wonderful Sound, under the leadership of saxophonist Bobby Zankel, continue to deliver outstanding concerts featuring special guest musicians who are virtuosos on the cutting edge of jazz in the New Millennium. The featured artist on this occasion was the incomparable saxophonist David Murray. Most of the usual Warriors personnel were on board, but with Fareed Simpson Hawkins substituting for Josh Lawrence on trumpet, Josh Lee subbing for Mark Allen on baritone saxophone, and Chad Taylor sitting in for Craig McIver on drums. These gentlemen fit in so well that it is likely we'll see them back with the band in the future.

The concert featured Zankel compositiions and arrangements that have become part of the standard repertoire of the Warriors. It is remarkable how this outstanding group creates fresh sounds at each performance, almost like new compositions. For example, this reviewer has heard Zankel's beautiful ballad "The Next Time I See You" perhaps a dozen times, and yet the current rendition was so fresh, and the solos by Zankel, Murray, trombonist Larry Toft, pianist Tom Lawton, and drummer Chad Taylor were so exciting, that it was like hearing an entirely new piece. The Warriors are one of very few big bands who can achieve this sort of resilience.

This concert exemplified what many musicians say they have experienced at one time or another: that great jazz emerges from apparent chaos. The band came on stage appearing a bit scattered and Murray as if he just disembarked from a red-eye plane flight. They began "Anthem for the Ancestors" in an out of sorts way. Then, at a certain point in the time, everything came together, and the rest of the show was a knockout. Zankel and Murray helped matters by delivering fascinating solos in different styles -Zankel bright, sharp, and intense, Murray with continuous, motorized sheets of sound. "Acknowledgment." From John Coltrane's A Love Supreme had some of the feeling of Trane's avant-garde Meditations, with alto saxophonist Julian Pressley delivering a solo to die for (he is one of the most under-recognized legends on the planet).

After an intermission, and by the time they got to "Spirits Break to Freedom," the band was in full swing, including a stunning flute solo by Stan Slotter, and a brilliantly conceived baritone saxophone improvisation by Josh Lee. The group got fired up for Zankel's "So Hot," a frenetic riff on global warming, which included exciting solos by bassist Lee Smith and Taylor on drums leading up to co-improvising by the whole eleven-piece band that was as rare and exciting as a super-nova. To conclude, "Anthem for the Ancestors" was recapitulated in a unique way, with distinct echoes of Paul Whiteman and Duke Ellington sustained by Lawton's piano theatrics that could have come out of a vaudeville show. Throughout the concert, Murray, always listening intently, stepped up for his solos with impeccable conceptions and a beautiful sound that few saxophonists can equal. At one point, he played bass clarinet, and of course one could not help thinking of Eric Dolphy's contributions on that instrument.

Some of the initial discombobulation may have reflected the real concern of the staff at the Painted Bride that their long-time building may be forced to close due to a severe financial crunch brought about by the recent decline of funding sources for the arts. I spoke with music curator and host of the concert Lenny Seidman, and he told me that the building, which houses a concert hall, art exhibition spaces, and other vital activity rooms, may be forced to close its doors. Although executive director Laurel Racza is optimistic about continuing the work of the Painted Bride well into the future, the building itself, at Third and Vine Streets, has been a landmark of the visual and performing arts in Philadelphia for almost a half century. For artists, performing artists, and lovers of the arts and music, to close it would be like shutting down the Betsy Ross House or the Ben Franklin Museum. In New York, they saved Carnegie Hall. Certainly, Philadelphians can find a way to fund this iconic performance and exhibition space, which has captivated audiences and stimulated the arts in an incomparable way.