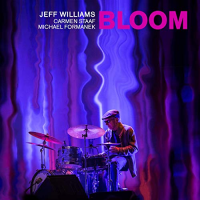 In a new departure, Jeff Williams has forsaken the quartet, quintet or sextet configurations of his previous four albums for Whirlwind in favour of this very convincing trio format. In tandem with this slimmed-down enterprise, he's employed a pianist and composer who is undoubtedly a rising star of jazz. Carmen Staaf graduated with a joint degree from Tufts University (Anthropology) and the New England Conservatory (Jazz Performance) and thence became one of Berklee College of Music's youngest faculty members. She's an active member of the NYC jazz scene; Musical Director for Dee Dee Bridgewater and her major concerts include a two-piano recital with Herbie Hancock (alongside Wayne Shorter) and Jazz at Lincoln Center with Wynton Marsalis. She's performed at the Village Vanguard, Blue Note, SFJazz plus the Montreal and North Sea Jazz Festivals, to name just a few.

The trio is completed by seasoned bassist Michael Formanek who's collaborated with a whole swathe of famous names including Freddie Hubbard, Stan Getz, Chet Baker, Tony Williams, Gerry Mulligan, and Joe Henderson amongst many others. Jeff Williams and Formanek have known each other since they gigged together in the 1970s and consequently Williams considered Formanek a perfect fit for this album. Despite ten of the eleven tracks on the album being attributed to a single musician, the opener, "Scattershot" is a collective improvisation, yet from its walking bass start it sounds pre-arranged.

Staaf has an uncanny ability to channel the late Bill Evans, closely emulating his gorgeous technique and sensitivity. This elegance is particularly noticeable on tracks such as Williams' melodious "Another Time," Formanek's "Ballad Of The Weak" and Buster Williams' sumptuous "Air Dancing." Some tracks transcend even this level of subtlety, Staaf's exquisitely fragile "Chant" being a prime example. There are also some teasingly quirky numbers too, such as Staaf's staccato-metered "Short Tune" and Williams' angular "Scrunge/Search Me" where Staaf begins to approximate Thelonius Monk or even Cecil Taylor yet always manages to retain a lissom vibrancy. But to instantly discern the true cohesiveness of this trio, just listen to Formanek's sprightly "A Word Edgewise" or the gracefulness imbued in Staaf's bluesy "New York Landing."

Scattershot; Another Time; Short Tune; Scrunge/Search Me; Ballad Of The Weak; New York Landing; She Can't Be A Spy; Air Dancing; A Word Edgewise; Northwest; Chant.