BY DAN MCCLENAGHAN
January 11, 2016
Sign in to view read count 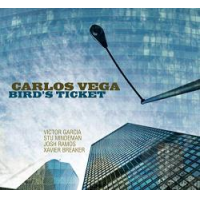 Saxophonist Carlos Vega's band crackles. The sound of "A Confluence in Chi-Town," the opener on his Bird's Ticket recording, has an on-the-edge urgency in its distinctive approach to the standard jazz quintet format—bass/drums/keyboard rhythm section and a trumpet and a saxophone—a line up like Charlie Parker and Dizzy Gillespie used.

Vega, a veteran of trumpter/band leader Doc Severinsen's band, sets up, with that high octane opener, an expectation for high level interaction, brash solo slots for himself on tenor, Victor Garcia on trumpet, and keyboardist, Stu Mindeman, backed by modern and often Latin tinged rhythmic drive. He and the band don't disappoint. They sound like Latin renegades on the title tune, swaggering just a bit outside the law, horn solos burning; and "Taurus and Virgo" sounds like a Wayne Shorter-penned out-take to the ground breaking Miles Davis outing, Filles de Kilimanjaro (Columbia Records, 1968), with Mindeman shifting, deftly, from acoustic piano to Fender rhodes.

This particular quintet configuration is one of the most common and enduring, making it hard for a band to carve out its own space. Vega and his cohorts do just this via the leader's distinctive and modernistic compositions—it's an all Vega originals set—crafty arrangements, spirited group interplay that sometimes bumps into contentious-sounding territory (they are reacting to each other, with gusto), and ear-grabbing freshness and spontaneity in their respective soloing. And a group can't do much more than that, on this January release that opens the New Year with a modern jazz blast.

A Confluence in Chi-Town; Bird's Ticket; Taurus on the Run; Taurus and Virgo; Dragon Rose; Chicago Eight; Elements; The Wizard; In Other Words; Reflecting Pool.