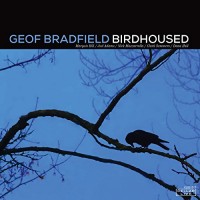 A horn-fest? That was the initial impression of saxophonist Geof Bradfield's Birdhoused, a set featuring a quintet with no chording instrument and  four horn front line in a live set at the Green Mill Cocktail Lounge. While Bradfield's Melba (Origin Records, 2013) paid tribute to the under-sung trombonist/composer/arranger Melba Liston; and his Roots (Origin Records, 2015) explored the sounds of Leadbelly, Blind Willie Johnson and the Georgia Sea Island Singers, Birdhoused expands the horizons, delving into the disparate sounds of Chicago soul songster Curtis Mayfield,  bop pioneer Charlie Parker,  and classical Hungarian composer Gyorgi Ligeti, along with five Bradfield originals, with one tune from the quintet's bassist, Clark Sommers, shuffled in.

So: tenor sax,alto sax, trombone and  trumpet makes for a horn fest; except that would be shortchanging the drive train, bassist Clark Sommers and drummer Dana Hall, who provide a high horsepower propulsion—both instruments just bit up in the mix, which is a good thing.

Opening with Curtis Mayfield's "The Other Side Of Town," the group proves itself a freewheeling, loose limbed outfit, full of spontaneity and intricate interplay, with solos—often torrid—all around, bringing another Bird to mind: Little Bird, Ornette Coleman, around the time of Science Fiction (Columbia Records, 1971), when the free jazz alto sax man used in his bands multiple hornmen of the adventurous variety. "Constellation," an elastic take on Charlie Parker's tune, rides in the same vein with a spirited sound, while Ligeti's "Sonatina" mellows things down to solemn mood.

After the covers, the set settles into what could be called the Bradfield Suite. Compositionally, the rest of the album comes from the leader—with a brief bass solo tune from Sommers slipped in. Starting with Bradfield's pensive "Nephila,"  rumbling through a turbulent "Solid Jackson," slinking along on "Fearful Symmetry," strutting through "Birdhoused," and wrapping things up with "Laconia," a bright-hued nod to Bradfield's fellow Chicago-an, saxophonist Clifford Jordan, whose middle name happened to be "Laconia."