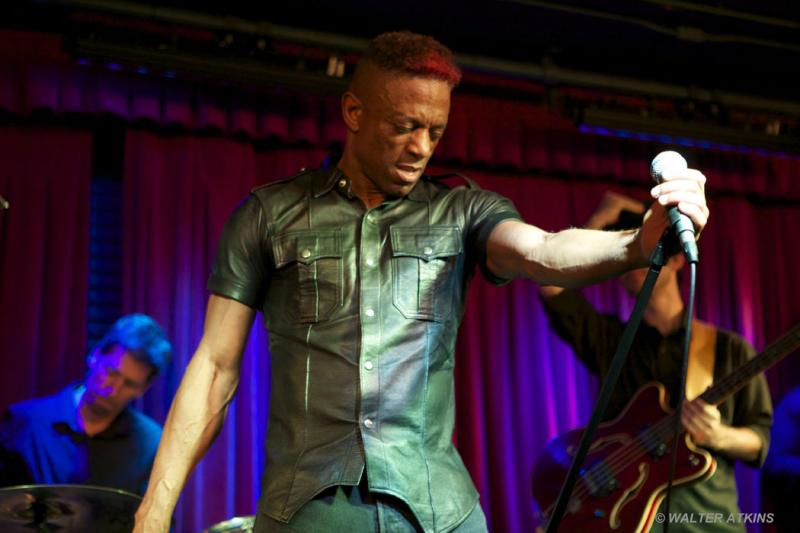 Thomas jumped into his first set with "Howlin" from his current album Crow (Earl Thomas Music, 2016) and the evening just took off from there. Rock and R&B delivered in his zestful style was exciting to watch, and he also promised a special surprise later in the concert.

With a wicked smile, he talked to the ladies about relationships and why they should buy his album. "Not healthy relationships, the dysfunctional ones. The co-dependents. Where your driving at 3 am looking for his car in another girl's driveway. Buy the CD and play track eight ("I Don't Believe It") every time he comes home." Other songs in the hi octane evening were: "Shot Gun Wedding," "She's My Baby," "Somebody's Callin,'" "Some Kind of Song," "Do I Know You," "High Life," "Let Me Be Your Car," "Lead A Horse to Water," "Happiness," "Love School," and "It's Not The Spotlight." The vibrant singer also did a touching ballad with trumpeter Thomas on "Tennessee Whiskey."

Thomas a fine storyteller, shared his memories about growing up in Pikeville, a small town in Tennessee. He owned a transistor radio that he rigged with a coat hanger antenna wrapped around a kitchen cabinet door. When held in just the right position, he could pick up a distant Nashville radio station's faint signal. Thomas would listen to an unknown singer that he liked, but could never quite catch his name. One evening, the family had gathered around the television to watch the American Music Awards. When one of the performers came on and started singing his song, the young Thomas jumped up yelling, "That's him! That's him!" His mystery voice was Rod Stewart, the soccer loving English rocker, and the tune was "Tonight's The Night." His family gave him some incredulous looks and comments.

On the next day his father, "made the 100 mile round trip to Nashville," and he picked up his first two Stewart albums, Atlantic Crossing (Warner Brothers, 1975) and Night On The Town (Warner Brothers, 1976). Thomas commented on his cool Dad and how much he appreciated him. Despite Stewart being a major influence on Thomas, the two singers have not met to date. Sounds like a possible bucket list item.

The energetic singer's 'surprise' for his fans was the rising East Bay vocalist Marina Crouse. He heard Crouse online and knew immediately he wanted to work with her. They performed two mesmerizing duets for the boisterous B&B crowd. First up, was the cold bluesy Etta James standard "Rather Go Blind." Their intense soulful rendition brought the house to its feet. The second duet was a hip arrangement of the Beatles' "A Little Help From My Friends." This novel treat was heartily enjoyed by all. Beth, one of his long time fans proclaimed, "He's amazing!" and she liked his "dramatic" stage presence. The rambunctious hoots and howls from the house throughout the night confirmed this.

Thomas used to play B&B regularly for years before traveling and performing internationally. Beth commented he visited Trinidad Elementary to encourage and support young performers and also donated his time and energy to fundraisers. "He Loves his community. He is beloved in San Francisco, Trinidad, as well as in San Diego. He has a very large fan base in Switzerland and in other parts of Europe. He has a huge following of people that love his spirit and his amazing talent wherever he goes."

Earl Thomas and his band's electrifying return to Biscuits & Blues was a solid start that should guarantee future appearances. With guest Marina Crouse, the night of stunning music went down smooth as Tennessee whiskey.