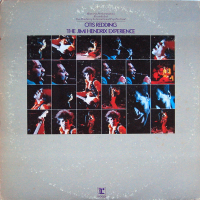 A short time after purchasing my first long-playing vinyl album with my own money, one Joe Cocker: With A Little Help From My Friends (A&M, 1969), I purchased my first and second live recordings, Mad Dogs and Englishmen (A&M, 1970) and Otis Redding -The Jimi Hendrix Experience—Historic Performances Recorded at the Monterey International Pop Festival (Reprise, 1970). I bought all of these records at Osco Drug Store in the University Mall in Little Rock, Arkansas. It was summer and fall of 1970 and I paid $2.69 for each ($5.99 for the 2-LP MDAE).

My cousin was not such a Hendrix fan, but I was curious what all the hubbub was about. Hendrix had just died from his barbiturate misadventure in September and Rolling Stone magazine was beside itself. I thought that Otis Redding -The Jimi Hendrix Experience—Historic Performances Recorded at the Monterey International Pop Festival looked like a pretty good starting place, if I even gave it that much thought. What I got was my introduction to so much more than Jimi Hendrix and Otis Redding. From Hendrix, I learned about B.B. King ("Rock Me Baby"), The Troggs ("Wild Thing"), and had my grand introduction to Bob Dylan ("Like A Rolling Stone"). Redding taught me who Sam Cooke ("Shake") and Aretha Franklin ("Respect") were and introduced me to the great Stax house band, Booker T and the MGs. This LP illustrated the potency and creative reach of the music as the late 1960s became the 1970s.

But, regardless of the music finery to be found here by Redding ("Shake" is a revelation) or Hendrix's other contributions to the LP (which were expanded to completion on The Jimi Hendrix Experience Live at Monterey (Geffen 2016)), there is a single event present to usher in the "Summer of Love" properly and it was Hendrix's definitive treatment of Bob Dylan's "Like a Rolling Stone" (not "Wild Thing" as the nattering nabobs would expect).

Bob Dylan was never the ultimate interpreter of his own music. This honor went to many: the present song and Hendrix's "All Along the Watchtower." Better that Philistines. Johnny Winter's "Highway 61 Revisited" from Second Winter (Columbia, 1969), that queer three-sided 2-LP release, redefined the blues through the lens of Dylan and Winter. .Leon Russell's "A Hard Rain's Gonna Fall" (from Leon Russell and the Shelter People (Shelter Records, 1971) was a ground-zero recording like his duet with Joe Cocker on MDAE. But Hendrix's LARS was something special.

Begin consideration with Hendrix's breezy rapport with the crowd:

"Yeah, I'll tell you, brother, it's really outta sight here, do ya know whaddimean? ...No buttons to push..."

At which time the guitarist begins tentative arpeggios through a B, E, and F#, and continues:

"But right now I want to dedicate this song to everybody here...with heart, any kind of hearts an ears [going off mic] it goes something like this here..."

What comes next is a glorious chopping barrage of chorded jags, like a primordial creature pent up and struggling to be released, Hendrix merely the vehicle. Finally straightening the drive out, Hendrix hits a groove, continuing his dialog:

"Yes, as I said before, it's really groovy here. Like to borrow you for about six of seven minutes to do a little thing a...yeah, if you'd excuse me for a minute just let me put my guitar right..."

And we have all had to put our guitars right.

At the time, I was unfamiliar with Bob Dylan's 1965 recording from his landmark Highway 61 Revisited (Columbia) LP. My introduction to the song was coming in the form of a tsunami blowing my hair back, laying waste to what few assumptions I had made about rock music during my apprenticeship period. Hendrix performed the song in the same way Creedence Clearwater Revival would play their Woodstock set two years later, as if in a blowing thunderstorm. A force of nature after which little in music would be the same.

Where Bob Dylan's recording may have been "that snare shot that sounded like somebody kicked open the door to your mind" for Bruce Springsteen, Hendrix's version was that of an expression struggling for the freedom to be. Hendrix had little use for Dylan's calliope effects and minstrel mentality. Hendrix was not kicking any doors open. He was blowing them off their hinges, disintegrating in flight. Hendrix remained conversational during his entire delivery save for going over the top on the chorus. He made Dylan's song his own. When the Rolling Stones decided to finally record the tune on their 1995 live recording Stripped (Virgin), the band obviously spent their time listening to Hendrix, though they did do a fine job taking the best from both performances. This Hendrix version will forever the definitive LARS.

The Jimi Hendrix Experience: Like a Rolling Stone; Rock Me Baby; Can You See Me; Wild Thing. Otis Redding: Shake; Respect; I’ve Been Loving You Too Long; (I Can’t Get No) Satisfaction; Try a Little Tenderness.