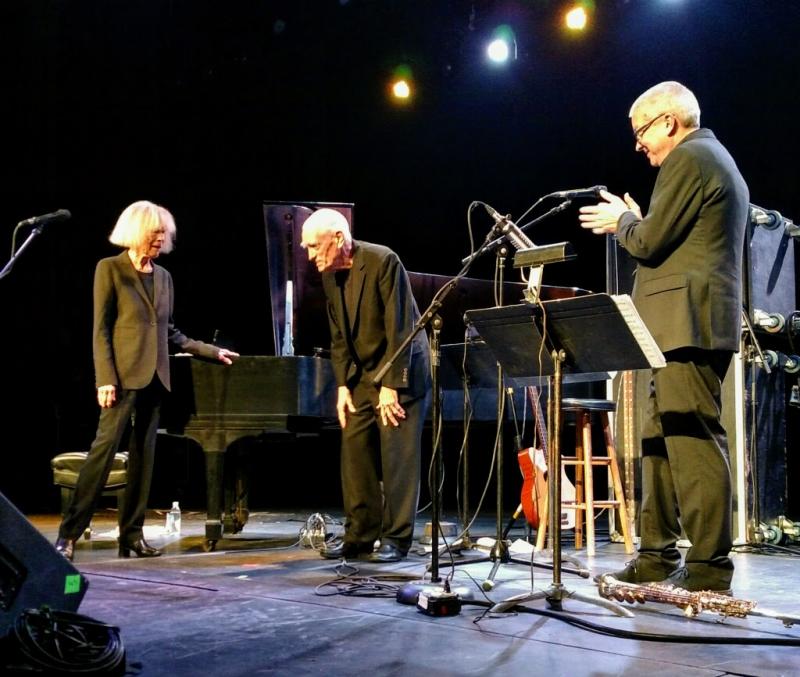 Knoxville's Big Ears Festival expanded to a full four days this year, giving it more time to go its expected merry, eclectic way. In a break with usual practice, there was no official Composer in Residence. That distinction could have gone to Gavin Bryars (with four concerts of his music)—or possibly Carla Bley (two concerts), Meredith Monk (two performances), or Henry Threadgill (who won the Pulitzer Prize for music last year). By booking coincidence, it was also a sort of mini-ECM Records showcase.

ECM artists included the aforementioned Gavin Bryers, Carla Bley, and Meredith Monk; also singer Theo Bleckmann, guitarist Ben Monder, trumpeter Arve Henriksen, Hardanger fiddler/violinist Nils Okland (in his first visit to the U.S.), accordionist Frode Haltli, organist Sigbjorn Apeland, and bassist/composer Mats Eilertsen. It wasn't entirely coincidental, because there was also a partnership with Music Norway, the Norwegian Jazzforum, the Ultima Contemporary Music Festival and the Norwegian Consulate General in New York to highlight Norwegian artists, which have long been well-represented on the ECM roster. While the festival has always had an international component, this year's Norwegian Invasion was especially pronounced.

The major event on opening day had to be Carla Bley and the Knoxville Jazz Orchestra, which drew on Bley's longtime big band repertoire. "On The Stage In Cages" came out swinging, and featured a dramatic trombone solo accompanied only by a brass choir. "Setting Calvin's Waltz" included a quote from the Gershwin standard "Someone to Watch Over Me." When Bley introduced the band ("pretty good, huh?" was her wry comment on the Orchestra) she pointed out the other members of her trio who were sitting in: Andy Sheppard on tenor sax and bassist Steve Swallow (as well as Bley herself on piano, when she wasn't busy directing). They closed the set with her five-part composition "The National Anthem" ("what better time?" she asked after announcing it). It's a sprawling piece, full of quotes from "America The Beautiful," military and football marches, and more. The enthusiastic audience wouldn't let her go, so they played "Who Will Rescue You?" as an encore.

Drummer Bobby Kapp and pianist Matthew Shipp played free improvisation in the intimate Square Room. Their recent album Cactus (Northern Spy Records, 2016) presented their improvisations as a collection of nine tracks, but their festival performance was a single, uninterrupted set. Kapp came on stage wearing an eye- catching aqua colored sequined jacket, but his playing was not comparably flamboyant. He and Shipp were a well oiled team, from the abstract opening (Kapp playing only cymbals) to sections with a swing feel (Shipp played a Thelonious Monk quote at one point, proof that he's not all about continuous chromatic flurries of notes). The flow moved on to a section of Shipp playing inside the piano, then finally gentle music with Kapp using brushes.

Composer Robert Ashley's "opera for television" has seven parts, and runs for three hours. It's hard to imagine performers other than the originals, especially Ashley's droll narration and "Blue" Gene Tyranny's synthesizers and piano. So Matmos (the duo of Drew Daniel and M.C. Schmidt) opted for rearrangement rather than replication. They presented three of the seven parts, each with its own staging and instrumentation. Part I (The Park) utilized live strings providing a drone, live flute obbligato, Schmidt's narration plus two female narrators as a chorus, with Daniel providing electronic percussion and occasional electronic voice processing. Part IV (The Bar) found Schmidt dressed for a night out (as was the chorus), with cheesy rock music playing and live cocktail piano. Part VII (The Backyard) had Schmidt alone, sometimes accompanying himself on acoustic guitar or keyboard—with the ubiquitous laptop background of percussion and synthesizer, of course. It was a completely arresting performance, successful in every way: musically, as stage performance, and a fresh interpretation of a seminal avant-garde performance piece.

Wu Fei was a pleasant surprise for me. She is a contemporary master of the guzheng, a 2,000 year old Chinese 21-string instrument in the zither family, similar to the Japanese koto. She played and sang a lot of traditional music, which was simply gorgeous. Clearly there are contemporary touches as well. Early on she explained that her instruments can be tuned much faster than traditional ones, due to the addition of tuning pegs like a piano. "Fisherman's Song" included some piquant dissonances that did not strike me as traditional; ditto the parallel harmonies she employed on a later tune, which also included a rhythmic pounding technique in addition to plucking the strings in the usual way. She was able to play tremolando chords with one hand while playing melodies with the other: there seems to be nothing she cannot make this ancient instrument do. During the performance she moved between two guzhengs, sometimes playing them both simultaneously. The audience was so enchanted they insisted upon an encore, which she satisfied with a song of her own, about her memory of a winter lake while growing up in Beijing.

Norwegian Hardanger fiddle/violinist Nils Okland made his first visit to the U.S. for the festival, bringing the band that recorded the acclaimed album Kjølvatn (ECM, 2016) to the St. John's Cathedral—the album was recorded in a church, making this an especially appropriate venue. The concert opened with "Kjølvatn," Økland's Hardanger fiddle in duet with double bassist Mats Eilertsen. From there I believe they went straight into "Fivreld," with its fast theme doubled by saxophonist Rolf-Erik Nylstrøm. Nylstrøm has an especially remarkable altissimo register, which he employed during solos as well as his unaccompanied introduction to one tune. "Undergrunn" again reminded me of the Scottish/ American folk song "Black Is the Colour (Of My True Love's Hair)," as it had when I first heard the recording. Near the end of the set Nylstrøm made an emotional announcement thanking the audience for being so generous ("hearing music you don't know, by musicians you don't know, in a language you don't know") and celebrating the fact that the performance was entirely acoustic, which is indeed a rare gift these days. The final tune came from the Shetland Islands: Økland dedicated it to refugees, and organist Sigbjorn Apeland moved from the harmonium to the church's pipe organ. A wonderful performance, and a festival highlight for me.

Økland and band members played two additional concerts later in the festival. The first was a duet performance with keyboardist Sigbjorn Apeland in another church, the larger Church Street United Methodist Church (despite its less grand name, a bigger space than St. John's Cathedral). This was another completely acoustic performance, beginning with music associated with Ole Bull, the iconic Romantic era Norwegian violinist/composer who the pair had celebrated on the album Lysøen: Hommage à Ole Bull (ECM, 2011). After a half hour of Ole Bull music with harmonium, Apeland moved to the church's pipe organ for improvisations on a mix of Norwegian folk tunes and melodies composed by Økland. The violinist even sang a bit while fiddling, leading into a big organ climax. The duo concluded with a "Travel Tune" on violin and harmonium.

Økland and bassist Mats Eilertsen played a duet set at The Standard, a much more intimate venue. It was a playful set: mainly traditional music, but with an open approach. They began both playing arco, and went into a new, experimental area briefly as the tune dissolved into string noise. During their improvisation on an American tune Eilertsen prepared his upright bass with a drumstick, and played a variety of scraping and percussive sounds, culminating in a high, koto-like solo. Full of surprises, he then detuned the low string on his bass to produce a low, rumbling solo. Økland introduced a set of tunes from Norway, Scotland (fiddler Aly Bain) and Canada that had a tuning in common with the Hardanger fiddle. The pair concluded with an original tune named "Amstel" inspired by an Amsterdam visit.

Keyboardist Ståle Storløkken and trumpeter Arve Henriksen have been playing together in the ambient jazz group Supersilent (which performed later in the festival) for over 20 years. There were electronic keyboards set up in the stage area, but Storløkken went straight to the church's pipe organ to begin the show. Henriksen began playing in the back of the church and processed up the main aisle to the front. The pair must have loved the sound of that organ, because they played the first 40 minutes of the concert as one continuous piece. Henriksen responded to the organ in various ways. He switched to his lovely falsetto singing voice briefly, then played trumpet through a laptop computer sampler (he and the organ traded sound effects for awhile), finally switching to the smaller piccolo trumpet. When Storløkken joined the trumpeter on stage he initially employed a percussive keyboard sound, a marked contrast with the legato organ. Then the pair generated a dense electronic atmosphere (the sort of sound more associated with Supersilent), a vocal-sounding synthesizer patch trading with the trumpet. For the final selection it was back to the pipe organ, but this time Henriksen began on bamboo flute, then voice (a song with lyrics, likely a Norwegian traditional song), finally switching to trumpet. It sounded like Storløkken literally "pulled out all the stops" for the huge climax.

Carla Bley brought her trio with longtime playing partners bassist Steve Swallow and saxophonist Andy Sheppard to the Bijou Theater stage. There were surprises, beginning with "Copycat," a tune receiving only the second public performance ever (Swallow joked that it went so well the first time, they thought they would try it again). Bley introduced "Naked Bridges/Diving Brides" mentioning her debt to composer Felix Mendelssohn—but given the laughter at her humorous reharmonization of the famous "Wedding March," it was probably unnecessary. Next came a World Premier called "Beautiful Jennifer" which Bley described as being dedicated to (or about) Donald Trump. She got another big laugh with her quote from "My Way." The trio closed with the title suite from the trio's recent album Andando el Tiempo (ECM, 2016). Music about addiction and recovery, which Bley helpfully translated as "The Passage of Time." Bley's considerable reputation as a composer tends to overshadow her piano playing, but at one time she was more or less the house pianist for many Jazz Composer's Orchestra projects. It's a pleasure to hear her in this context, and I cannot recall a group that exudes more joy in playing together. A fine climax to Friday's festivities.