Sue Sheriff: Better Than Anything 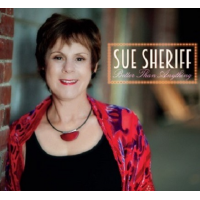 It was in one of those art pieces often used to close an hour out on National Public Radio where a jazz vocalist was being interviewed about the durability and longevity of the "Great American Songbook." The singer remarked that as long as listeners age and have life experience, the standards composed between 1920 and 1960 will always be rediscovered...one must have lived to properly appreciate these songs. Age, experience, life...these are what have been distilled to their essence in these great songs.

Life experience is also one of the principal elements necessary for singing these songs. While many fine singers exist, educated in the conservatory, there is an authenticity rendered from life alone that lends a potent seasoning the art of singing. Bessie Smith, Billie Holiday, Ella Fitzgerald and Sarah Vaughan never saw the New School. But they did see real life, up close and personal. That is something you don't learn in the conservatory.

There are also those artists among us, that had day jobs and pursued their respective arts on a semi- professional to professional basis. Portland, Maine vocalist Sue Sheriff is just such a voice. With her, there is a new sheriff in town: just not new like you think. Sheriff's brand of jazz singing is like that of Louise Van Aarsen (Destiny (Self Produced, 2012)) and that is their brand of jazz singing is for grownups by grownups. The two also share a most important teacher and benefactor in one Rebecca Parris, the modern queen of the jazz ballad. Parris has a knack for pointing artists in a direction and allowing nature to take care of the rest.

Sheriff lived a complete life in a variety of formats: wife, mother, real estate professional. Sheriff also remained creatively busy. Inspired by her children, she began writing children's songs, releasing her first collection Love Buddies in 1998. A second children's album in 2005 entitled Believe in Yourself which morphed into a show. In 2008, Sheriff expanded her expression, published an illustrated children's book and accompanying CD with original songs entitled In Harmony and Other Songs of Peace. For the past five years, Sheriff has worked locally with pianist Pete Blue as the doo "Sue n' Blue." This latter experience led to a good part of the repertoire presented on her jazz debut Better Than Anything

Better Than Anything is a delightful mix of standard and not-so-standard tunes that reveal a wide stylistic appeal. On ballads like, "Remember the Rain" and "Turn Out the Stars" Sheriff displays all lessons learned from Rebecca Parris, principally, a potent musical momentum at slow tempi and a perfectly balanced midrange as its vehicle. "Where did Summer Go" and "If You Went Away" are enhanced by Bill Vint's tart flute in the former and Mike Turk's superb jazz harmonica in the latter.

As fine as Sheriff's aptitude for ballads is, her grasp to the upbeat is better. While ballad singing has its own unique challenges, it is equally difficult to master the drama and dynamics to address the swinging pieces. The title piece and "Devil May Care," provocative vehicles for Bob Dorough. Sheriff captures Dorough's ebullience, magnifying it a mirthful spotlight. Sheriff slays to instrumental standards-cum-vocalese vehicles, Clifford Brown "Daahoud" and Miles Davis' "All Blues." With those, Sue Sheriff shows she has arrived and is the new sheriff in jazz town.

The Face That I Love; Can’t Get Out of This Mood; Remembering the Rain; Better Than Anything; Turn Out the Stars; Devil May Care; Where Did the Summer Go; Daahoud; If You Went Away; Whisper Not; Night Lights; All Blues.

Title: Better Than Anything | Year Released: 2016 | Record Label: Self Produced