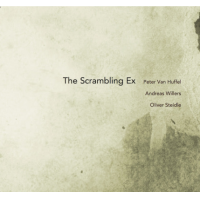 Deftly juggling twisted harmonic sequences, free improvised passages, sweet and simple jazz melodies, and stop-on-a-dime rhythmic convolutions, The Scrambling Ex nods at all sorts of musical reference points without aping anyone in particular. An equal collaboration between multi- reed player Peter Van Huffel, guitarist Andreas Willers, and percussionist Oliver Steidle (who's since been replaced by the remarkable American drummer Devin Gray), the trio relentlessly pushes the outside of the musical envelope throughout their eponymous debut album. Willers, a German-born guitarist who's been recording all sorts of interesting music—from funky fusion to free improv and all points between—since 1981, is a remarkably multi-faceted musician whose sheer versatility is front and center on this bass-less trio outing. Six of the nine compositions here are his, and they're a diverse bunch, indeed. Van Huffel, originally from Canada but now resident in Berlin, chipped in the other three pieces. The Scrambling Ex represents a rich, musically fertile middle ground between Van Huffel's other musical concerns: the raging, rocking free-jazz-infused frenzy of Gorilla Mask, the intricate and intimate acoustic trio BoomCrane, and the atmospheric classically- informed inventions of House of Mirrors.

The Scrambling Ex opens with Van Huffel's "Beast," an episodic piece in which an alien-sounding soundscape is abruptly subverted by a tricky theme which then leads into an intense improv section: Van Huffel's broiling- hot alto way out in front. The musical variety never lets up as the trio explore a dizzying array of musical color fields that sit more-or- less in a triangle with vertices at free improvisation, math rock, and modern jazz. Willers' metallic guitar solo provides mega-thrills on "Case of Need," while Van Huffel's "Tangent" (a track that also appears on Van Huffel's remarkable quartet album Like The Rusted Key, Fresh Sound New Talent, 2010) uses a similar frenetic energy in a much more directed way. Here, the result is not unlike a bass- less, saxophone-dominated take on the work of math- rockers Don Caballero. Coming from the same general sonic territory, Willer's "Flegenfloet" is a bit straighter; ironically ripping a page out of Van Huffel's own Gorilla Mask playbook. Fans of rock excess will dig the fuzz bass here. More familiar modern jazz references abound on the jaunty—but no less energetic—"Princess" and "Groom and Bride," both driven by Steidle's excellent drumming.

The trio probes the other end of the sound spectrum on Van Huffel's brooding, atmospheric "Happenstance" and Willers' "Sonic Finder." Here, energy is gathered inward into a slowly coalescing, highly- concentrated tension that never really releases. Here, the trio's sound evokes the early 1970s recordings of Terje Rypdal and Edward Vesala for the ECM label, and its lesser-known JAPO subsidiary. The tension gets released in a big way on Willers' "Adventures in Nalepaland." Based on a vaguely Mahavishnu-esque guitar riff that's given a slightly Eastern European twist by Van Huffel's keening clarinet. Steidle's aggressive, over- the-top drums eventually pull Willers and Van Huffel into the realms of sludge-rock.

The Scrambling Ex is not short on musical surprises and unexpected transitions. This is modern, free-leaning jazz lovingly polluted with a vast variety of non-jazz influences, though not in a calculated or contrived way.

About The Scrambling Ex