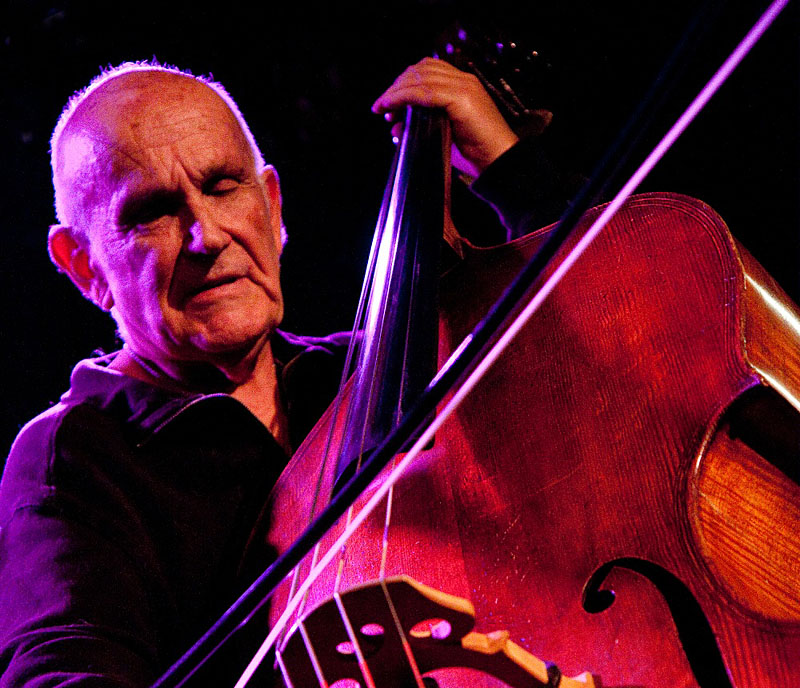 Bertram Turetzky might well be considered the Godfather of San Diego contrabass. He has mentored many of the area's top players, like Bob Magnusson, Mark Dresser, and Rob Thorsen, to name a few.

Even though he's retired from teaching since 2003, Turetzky remains active, if selective about gigs. His Dizzy's concert was a relatively rare example of Turetzky the performer, playing a hometown show.

The bassist gathered a small group of mostly string players to accompany him. His main collaborator, though—in music, as in life—was his wife Nancy, who just so happens to be a virtuoso flautist. Also on the bill were violinist Alyse Dreiling, violist Francesca Savage, and Lorie Kirkell on the cello. A final ingredient was the narration of Dizzy's owner Chuck Perrin, a musician in his own right who read the poem "Mingus In The Underworld " later in the evening.

The music was rich in variety throughout the program, which consisted of classical works, one from the 14th Century, and jazz, some of which was fused with poetry from the likes of Jack Kerouac and Lawrence Ferlinghetti. Turetzky kept the personnel onstage constantly in flux as well, going from solo to duo to trio and more.

The bassist began alone, with the first piece from "Beat Suite" a collection of music and poetry, which found him slapping the bass violently while reciting a poem about Harpo Marx. Throughout the recitation, he drew from deep arco lines that contrasted joy and mourning, mixed with deft pizzicato work. He then carried on with Ferlinghetti's "Sometime During Eternity," which used a plucked blues form as its base.

Wife Nancy joined him on piccolo for an adaptation of Ferlinghetti's "Violin and Horse"— a commentary on abstract painting with humorous, almost psychedelic text—soaring and swooping, and acting as a perfect (though odd) partner to the low tones of the bass.

Kerouac's "Deadbelly" followed, and it was Turetzky's first really stunning feature, as he demonstrated his complete understanding and mastery of the blues, lunging and lurching through the form with astonishing bits of hammer-ons, whole sections of double-stops, and triads interspersed with a melody informed and infused by the most gutbucket emotional content—all while reciting lines like "monkeys in his hair, drooling spaghetti, beer and beans." Turetzky walked the changes used glissandi, and pulled deep blue-notes in a mindboggling display of right and left brain cooperation.

Nancy Turetzky returned on flute and Kirkell joined the cast for a mesmerizing reading of 14th Century Italian composer Jacopo Bologna's motet. Although this piece was pre- Baroque, with polyphonic harmony, it sounded startlingly modern. The flute began with a melody that was answered by the cello in an almost-round form. The bass commented throughout, with soft arco lines that supported the others' efforts. The lines became gradually more contrapuntal, reaching a stage where they orbited around each other in a swirling menagerie.

The cellist then departed, leaving the Turetzkys to tackle 20th century composer Richard Felciano's "Spectra." The piece began with the piccolo playing short broken fragments over the bassist's long, drawn low tones. Suddenly they erupted with lines in unison, Turetzky then slapping the edge of his bass and almost hissing the word, "hey." Piccolo yielded to flute, and the bassist's bow began to drift toward the bridge for an eerie sul ponticello effect.

Next up was another tour-de-force, composer and contrabassist Frank Proto's work for bass and narrator, "Mingus In The Underworld." Turetzky began alone; bowing the ominous, spooky melody with an arco so strong it set fixed objects into vibration. Using a wireless microphone, Perrin crept towards the stage to deliver the opening, "M- I-N-G-U-S ! In the spotlight." From then on it was a duet of forceful bowing and occasional turbulent plucking with Perrin's recital of John Chenault's words, becoming quite turbulent, befitting the troubled genius of Mingus.

It should be noted at this point that aside from a microphone for announcements and narration, the entire concert was performed sans amplification, all too rare in these modern times. It made the power of Turetzky's bass even more remarkable. No one in the audience had to strain to hear the bass, unless that was his intention.

For the finale, Turetzky assembled his entire amalgam of violin, flute, viola and cello to play Timothy Cheney's sprawling 20th century work, "Quintet." It began quietly with plucked violin harmonics, and a very dissonant viola. Long stretches of piccolo weaving around the strings yielded to sections of the flute and strings finishing each others' ideas and occasionally linking in unison. There was an episodic give-and-take between dissonance and consonance, and the piece wound down in a pianissimo hush that exuded soft overtones from the performers.

Throughout the performance, Turetzky held the audience's attention with his acerbic wit and pointed anecdotes, providing additional insight into the mind of this giant of composed and improvised music.