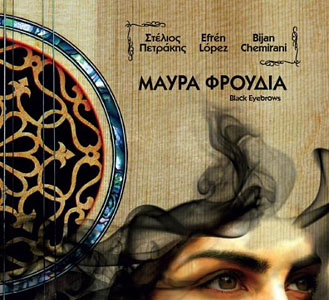 It is quite rare to find, in so-called world music, a unique and original meeting of cultures, striking in its obvious, organic and modest simplicity. As if that is the way things should be, without artificial political/artistic/cultural conventions and free of the new-age baggage of superficial slogans about one world without borders. But that is exactly the magic behind the Mediterranean trio of Cretan lyra player Stelios Petrakis, Spanish multi-instrumentalist Efrén López and Iranian/French percussionist Bijan Chemirani (son of the great Iranian zarb master Djamshid Chemirani). All three have collaborated before with Greek/Irish multi-instrumentalist Ross Daly.

Mavra Froudia (Black eyebrows) succeeds in sounding fresh, open and timeless—unbound by traditional musical cultures, but still based on the three musicians' musical heritages by the broadest definition.: the Greek is similar to the Turkish and the Persian; The Persian to the Indian, Afghan, Arab and the Spanish and Andalusian to the Moorish and Arab. It is indeed, at least musically speaking, a small world.

From the opening title track the trio articulates its intentions— open, intimate and receptive collaboration, as this López-penned composition bounces gently between Greek, Andalusian and Middle-Eastern genres without subscribing fully to any. Petrakis' "Üç Telli" sounds rooted in ceremonial Turkish classical music, enhanced by López's masterful playing on kopuz—a Turkish string instrument but with a character all its own. The mysterious "Hortus Deliciarum" is an imaginary medieval/modern dance, with virtuosic interplay between López's hurdy-gurdy and Petrakis' lyra. The fast duo of López and Petrakis, on assorted string instruments on the dance-like "Syvritos," is another testament to their versatility, and ability to assimilate elements from other cultures into their own musical vocabulary.

"A.A.A.A.A.A.A" begins as traditional Afghan/Middle Eastern composition, but soon finds a modern life all its own, as Chemirani, López and Petrakis exchange solos. "El Nuvol d'Oort" combines themes taken from a 12th Century troubadour song with ideas referencing the theories of astronomer Jan Oort, cohesively tied together by Chemirani's solo percussion. The last two compositions "Saros" and the traditional "Pano Choros," are rooted in the rich musical culture of the island of Karpathos: the first, a gentle dance; the second (the most popular dance from that island), played only by Petrakis on two lyras.

Hopefully this debut from Petrakis, López and Chemirani will be but the first in a string of many future collaborative projects by this excellent trio.