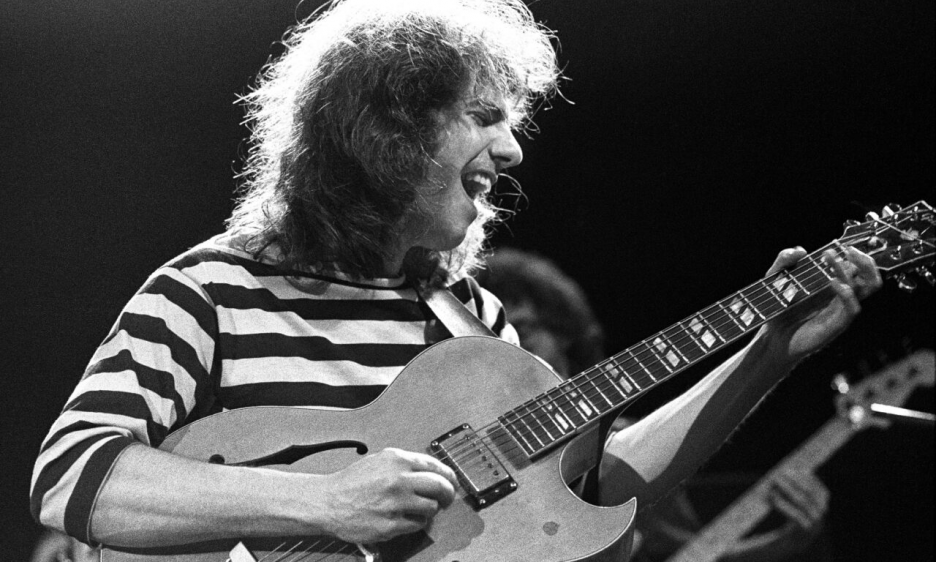 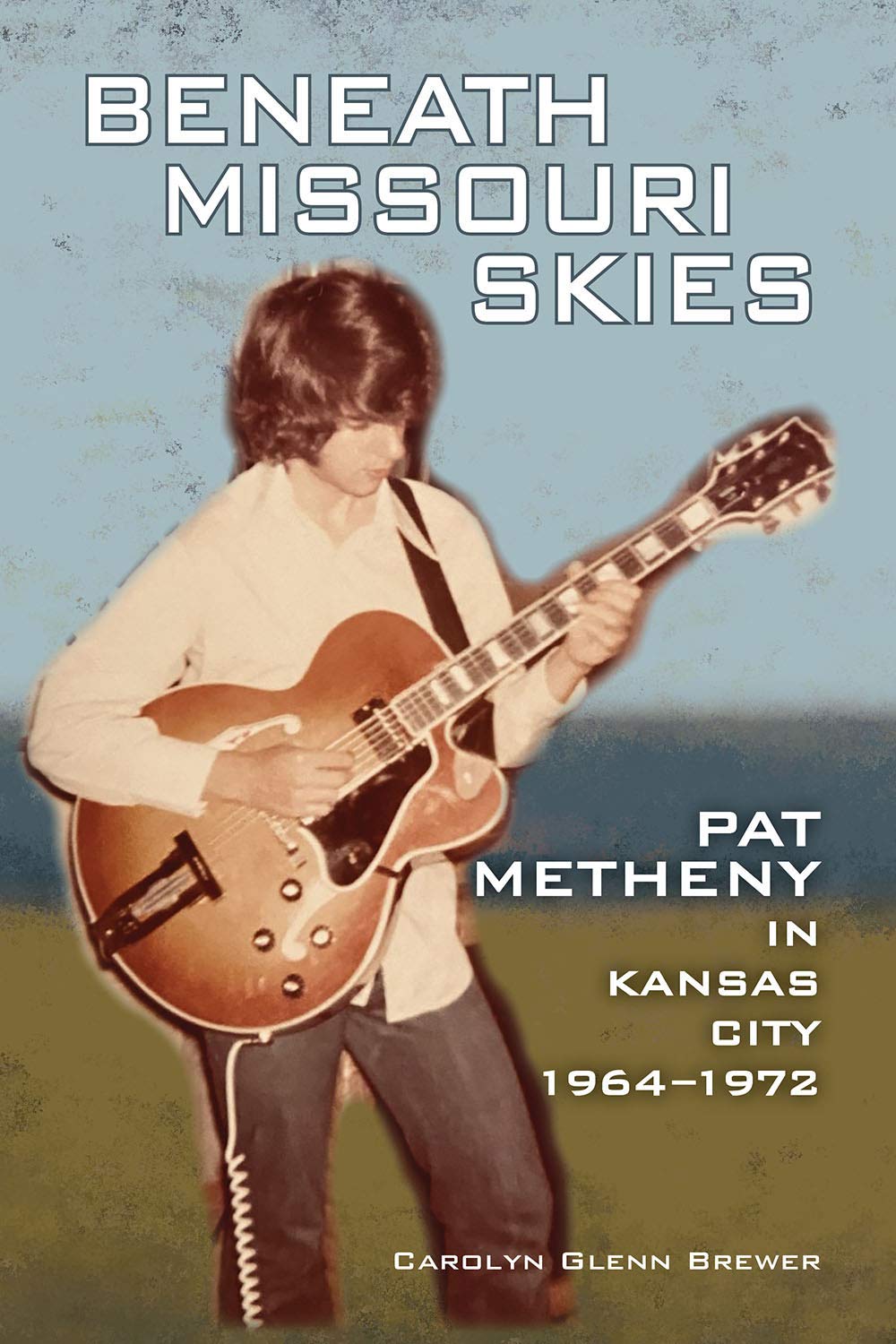 Although Pat Metheny is in many aspects a global citizen, he is first and foremost a native of Missouri. His midwestern-American background and influences appear in his music much like a motif appears in literature. Perhaps this is most evident in his 1997 album with Charlie Haden, Beyond the Missouri Sky (Verve), where the music has something of a jazz-meets-Americana vibe to it. Author Carolyn Glenn Brewer uses this title as the inspiration for her book, Beneath Missouri Skies: Pat Metheny in Kansas City 1964-1972, which provides a fascinating in-depth account of Metheny's formative musical years.

Brewer has been an important figure in the Kansas City music scene for years both as an educator and a writer. Her 2017 book, Changing the Tune: The Kansas City Women's Jazz Festival 1978-1985 (UNT Press), gives a detailed account of the first jazz festival dedicated primarily to women performers. She is also close friends with Pat and his older brother, noted trumpet player and journalist Mike Metheny, along with many other musicians from Lee's Summit, Missouri and Kansas City as well. Beneath Missouri Skies presents a well-researched and detailed account of Pat Metheny's early years along with information about the musicians and events that helped him become a world-class jazz artist. The book features interviews with Pat and Mike along with many of their musical friends and associates.

A good deal of Pat Metheny's early life has been well-documented in previous interviews and articles. Many jazz fans are already familiar with certain aspects of his early days in Lee's Summit. It's fairly common knowledge, for example, that he came from a musical family with both parents being musicians along with his brother Mike. Many jazz fans also know that Pat Metheny's life changed when he saw The Beatles perform on The Ed Sullivan Show in 1964.

Brewer begins by discussing this iconic performance. As Metheny has frequently mentioned in interviews, he was right at that age where seeing The Beatles on television changed his perspective. In this aspect, he wasn't any different from countless other kids his age who wanted to get their hands on a guitar and learn to play it. However, later the same week in 1964, another important event occurred within a few blocks from where The Beatles' performance took place.

The new Miles Davis Quintet had its debut performance at Lincoln Center's Performance Hall. This group featured Davis along with Herbie Hancock, Ron Carter, George Coleman, and Tony Williams. This performance was recorded and released on two albums: My Funny Valentine (Columbia, 1965) and 'Four' and More (Columbia, 1966). As with The Beatles' performance, something happened to Pat when Mike brought home a copy of 'Four' and More. These two major events that opened Metheny's eyes and sparked his interest in both guitar and jazz.

Beneath Missouri Skies is much more than simply a biography of Pat Matheny's early days growing up in Missouri. This is an in-depth discussion of the musical world the young Metheny was immersed in. Much of the information included here concentrates on not only Metheny's personal experiences, but those of musicians who helped him develop as a player. The book features many insightful and often humorous stories.

One such case comes shortly after seeing The Beatles on television. Metheny was obsessed with getting his hands on a guitar. Of course, coming from a family of trumpet players, the guitar was not the kind of instrument they thought he should be playing. So when Pat told his parents that he wanted a guitar, they weren't exactly receptive. As he describes in the book, "For them, that was like 'I think I'm going to join the devil worship church down the street. Is that okay?'" His parents were against it, but he was persistent, and his tenacity paid off. They eventually allowed him to get a guitar only if he would agree to play French horn in the school band. Although he took up the horn, the guitar was an all-consuming passion that remained with him from then on.

Like many kids from the early sixties, Pat wanted to play rock and roll, and he even started his own group called The Beat Bombs, who played popular rock songs of the day. It didn't take long, however, for jazz to become as much of a driving passion as guitar. After Mike brought home 'Four' and More, Pat's musical direction shifted. As Pat recalls, "[w]ithin the first five seconds of the needle touching that vinyl, my life was a different life." By the time he was 15, Pat was playing jazz at a Kansas City restaurant called The Flaming Pit. As Mike Metheny recalls, "Pat played great. I was very proud of him, and during the break, the pianist said, 'I want to break all of his fingers!' Pat was fifteen at the time and was already starting to become a world class guitarist."

Along with anecdotes of situations like this, Beneath Missouri Skies also discusses some of the important local musicians and events that helped shape Metheny's musical life. One such event was The Unity Band. Unity Village, which is of course the inspiration for the song from his 1976 album Bright Size Life (ECM), was a place near Lee's Summit where locals gathered for recreation. Its founders felt that music helped to build a sense of community. The Unity Band was not only important as a place for the Methenys to play, but it also seemed to show Pat the unifying power of music.

One of the most influential musicians in both Pat and Mike's life was Keith House, a band director who encouraged a standard of excellence in both young musicians. Mr. House was one of those teachers whose love of music along with his work ethic and compassion helped the Methenys develop their talents. As for Pat, he realized that "although I was primarily interested in jazz, the qualities that make good music transcend style of idiom. He taught me how to be a bandleader."

Before becoming a bandleader, though, Metheny had to develop his chops. He had been playing fairly often at The Flaming Pit and Pappi's Pizza, but things definitely started to change when he joined The New Sounds Trio Plus. This band featured Pat along with Kevin Clements on bass and Dru Rachaner on drums allowed the young musicians to grow. As Brewer mentions, by "getting together every weekend, they moved into a level of playing they couldn't have reached on their own."

Pat played every chance he got, and given his level of proficiency, he got plenty of opportunities to play. One of the most important gigs he had was playing in the bar of a Ramada Inn. Since he was underage at the time, he had to get a special permit to play there. Metheny wouldn't miss a gig here, and he frequently had to come directly from his high school in order to get to the job on time. The Ramada Inn, however, proved to be a big step for him musically. Not only did he hone his skills as a musician, he started to gain notoriety as well. Musicians started hearing that this was a place to check out—people like Urbie Green, David Hungate, David Paich, and Jeff Porcaro were only some of the noteworthy musicians who came to check out the scene at the Ramada Inn.

There are, of course, many other musicians who played a major part in Metheny's life, and Brewer discusses quite a bit of information regarding their lives and experiences as well. While some of the stories may not directly involve Metheny, the people and their experiences certainly had an effect on him. Along with these important local figures, there are also several encounters with celebrities as well. In one instance, Pat had the opportunity to play with Roy Clark. He also got acquainted with artists like Clark Terry, Lee Konitz, and Attila Zoller. Both Metheny brothers got the opportunity to meet Cannonball Adderley. Perhaps the biggest celebrity encounter, however, was Wes Montgomery, whom Pat met at The Kansas City Jazz Festival in 1968. Montgomery was talking to Clark Terry backstage when Pat saw him. "He was golden. Literally, it seemed to me that there was a golden light coming off of him!" Pat got his autograph, and he still has it to this day.

Near the end of the book, Brewer includes a section about Pat getting the chance to play with Herbie Hancock. This is somewhat ironic considering that Hancock was part of the band on the 'Four' and More album that was such a pivotal musical experience for Metheny. They played in a friend's living room, and Pat asked Hancock for advice before he left. Herbie simply told him "Keep doing what you're doing," and he handed Pat his card. Metheny has been doing that ever since, and like Wes Montgomery's autograph, he still has that business card.

Beneath Missouri Skies traces Pat Metheny's stages as a musician from the early days of playing at pizza restaurants to playing in front of large audiences as a professional. Whether he was playing with his friends in the New Sounds Trio or later driving frantically to make it to his regular gig at The Ramada Inn, Metheny comes across not only as a talented musician, but as a very thoughtful person as well.