By DAN BILAWSKY
February 12, 2012
Sign in to view read count 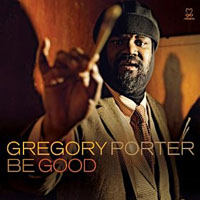 Debut albums often serve as fine introductions to the work of fledgling artists with potential for greater things, but that wasn't the case with Gregory Porter's Water (Motéma, 2010). Porter's debut, which was nominated for a Grammy Award, presented a vocal soul-jazz juggernaut that seemingly materialized out of thin air as a fully matured musical entity. His early experiences working in small San Diego clubs and singing in Off-Broadway and Broadway productions in New York helped Porter to establish himself as a vocal talent who doesn't merely sing songs but, rather, inhabits different personae delivering messages through music.

On Water, Porter showed that he was capable of shifting from politically charged fire and brimstone ("1960 What?") to soothing serenades ("But Beautiful"), demonstrating an extraordinary range in style and sentiment. He continues to branch out in various directions on Be Good, his highly anticipated sophomore effort. The album opens with the emotionally engaging "Painted On Canvas," and, on the title track, pianist Chip Crawford delivers dainty piano work, reflecting the "dancing" references in Porter's lyrics. Porter sings with Bill Withers-style bona fides on "Real Good Hands," as he convincingly explains to in-laws- to-be that he looks up to them and that their daughter will be taken care of. He exhibits a "flower power" attitude of peace and love as he marries jazz, soul and folk attributes on "Mother's Song," a tribute to his mother.

While the emphasis is squarely placed on Porter's own music—he penned nine out of the twelve tunes—the album ends with a double shot of classic jazz. Porter lets loose on a stirring version of Nat Adderley's "Work Song," which features strong solo spots from saxophonists Yosuke Sato and Tivon Pennicott. The album ends with a mellow, a cappella take of "God Bless The Child."

Porter presents various facets of his personality throughout the album, but the jubilant "On My Way To Harlem" best explains his artistry. In name checking the divine artistic triptych of Duke Ellington, Langston Hughes, and Marvin Gaye, Porter essentially outlines his own design as a soulful jazz poet. If Water heralded the arrival of the next big name in vocal jazz, then Be Good makes it clear that Porter still has plenty to say. Be Good is beyond great and he's here to stay.

Painted On Canvas; Be Good (Lion's Song); On My Way To Harlem; Real Good Hands; The Way You Want To Live; When Did You Learn; Imitation Of Life; Mother's Song; Our Love; Bling Bling; Work Song; God Bless The Child.