By Dan McClenaghan
August 4, 2016
Sign in to view read count 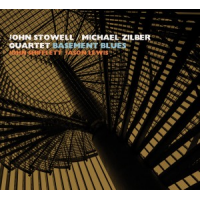 Basement Blues is the third Origin Records CD offering from the John Stowell/Michael Zilber Quartet, following Shot Through With Beauty (2009) and Live Beauty, (2013). Guitarist Stowell's approach is distinctive—silvery chords and pinprick single notes that reverberate from the rafters. Saxophonist Zilber is a flawless, soulful technician on soprano and tenor saxophones. Bassist John Shifflett and drummer Jason Lewis are perfection in the supportive rhythm rolls. It all comes together in a cohesive set that is probing and cerebral and laid-back approachable.

The set features two classics: Jerome Kern's "Nobody Else but Me" and the closer, pianist Bill Evans' "Very Early." All other tunes are originals from the pens of Stowell or Zilber, with one group-written composition, "Later that Night," that—with such a groove—doesn't sound like a free improvisation, though it may well be.

The disc's title tune, written by Zilber, opens the set on a reflective note. Zilber is exquisite on soprano horn, and he adds some almost subliminal piano to the rhythm, a subtle and beautiful sparkle behind Stowell's piquant solo. Jerome Kern's "Nobody Else But Me" is given a playful turn, and "Stowell In Heart," from Zilber's pen, is introspective, wandering, lovely, a somewhat amorphous type of tune that could be mistaken for a Wayne Shorter composition. Stowell's "Violin Memory" features Zilber putting out a robust and gritty sound on tenor sax to contrast with Stowell's effortless grace.

With three disc's now to their credit, the John Stowell/Michael Zilber Quartet has crafted a group sound as individualistic, and as modernistic and compelling, as any out there.

Basement Blues; Nobody Else But Me; Stowell In Heart; Stay Right There; Violin Memory; Later That Night; I Wish; Have Yourself A Vince Guaraldi Xmas; Stowell Mates; Very Early.