Logan Strosahl: Up Go We 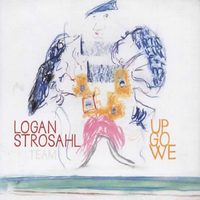 Duke Ellington famously said, There are two kinds of music. Good music, and the other kind". Creative Improvised Music really has no boundaries, and there is virtually nothing that cannot influence the final result. It is quite possible for the adventurous listener to play a different album every day for a decade and never hear a musical style that repeats. Swing is dead, long live jazz!

Saxophonist Logan Strosahl demonstrates this truism with Up Go We, a joyous, rollicking musical set which manages to blend the 17th century English Renaissance music of a composer like Henry Purcell with Ellington, Miles Davis, Ornette Coleman and much more. There are through-composed sections, improvised sections, gorgeous examples of pure voice-leading and intense swing. Each track surprises, as does the flow with any particular track.

In much the same way as pianist Julian Schneemann's Roundabout, Strosahl has created a synthesis of the composed and the improvised, effortlessly showing that his wide range of musical tastes and influences has been fully integrated. There is something for everyone, with much to savor many times over.

Representative of the above, at least from one point of view is the title track, which is the longest piece and is placed at the center of the album. Full of strutting, swinging energy, the music flies through the air, carrying us along, almost demanding an immediate replay in order to figure out what just happened. Were there harmonic changes? Is there a melodic theme hidden in the seemingly free lines? Bassist Henry Fraser and drummer Connor Baker nearly explode from the speakers, pushing the horns ever onward; fantastic track.

Surrounding this buzz saw is the beautiful "I Miss You" which cannot seem to decide which musical era it belongs to; the ominous opening of "Bildung" gives way to enchanting music that somehow sounds quite structurally free and yet completely under Strosahl's control. "The Leaves Be Green" strongly evokes scenes of English courtly dance music which is then stretched and pulled but never destroying the mood of that time. Another technique of early classical music, the ground bass, is used in "M.M. Ground" and isharmonized to modern standards, resulting in a delicious clash.

On the other side is "Note-Against-Note a3 (for Lyle)," which is a delightful short example of 17th century voice leading that manages to also sound modern; "Moon" does not announce to which era it "belongs" but rather merges many together as it mutates. Following this are two "Donky Kongs," the first clearly "composed" and slyly humorous, followed by a rendition that features more improvisation.

The Jerome Kern standard, "Smoke Gets In Your Eyes" ends the set, emphatically stating that Strosahl and company know, and can revel in, the "jazz tradition."

Strosahl is already a master, and where he will go from here is anyone's guess, for Up Go We is another Best Of 2016.

Miss You; Bildung; The Leaves Be Green; M.M: Ground; Up Go We; Note-Again- Note a 3 (for Lyle); Moon; DK’s Jungle Jewel; DK’s Jungle Nights; Smoke Gets in Your Eyes.