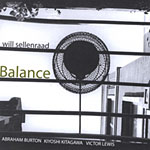 Will Sellenraad grew up in a place and time many people dream of: New York City's downtown scene of the '60s and '70s, when music and art were both in a state of quicksilver flux. Given that his parents (prominent New York artists themselves) named their son after modern-art pioneers William de Kooning and Piet Mondrian, it is pure serendipity that Sellenraad's Beezwax Records debut reflects the sound of CTI, a record label that got just as much criticism as the works of the aforementioned modern artists.

The bluesy groove of the title track motors right down Broadway as Abraham Burton's tenor sax billows sweet smoke while Sellenraad fills elegantly, Victor Lewis keeps it light on the cymbals, and Kiyoshi Kitagawa plays standard bebop bass. (That's what purists hated the most about CTI: It always echoed the tenets of the Old School, but it dared to embrace the new electric sound.) The effect is heightened when Sellenraad takes the spotlight. A student of both Jim Hall and John Abercrombie, Sellenraad's guitar finds a wonderfully happy medium through Balance that takes Grant Green's cool blue sound and brings it to a grittier, more urban place.

The coolness increases on the blistering "Double Down." Burton's simple, direct tenor evokes Stanley Turrentine's best CTI works, Sugar and Salt Song (both 1971 releases), and then Burton swaps smoky tenor for soaring soprano on "Prayer," a golden tribute to the late Elvin Jones. Sellenraad pays tribute to Lewis—who Sellenraad credits as a major compositional influence—with "Blewis," a joyous romp that's like a dinner party filled with best friends. For the lion's share of Balance, Lewis keeps it spare, keeping his fills and solos short and site-specific; on "Blewis" and his own "It's Been a Long Time," Lewis shows he's still got the power and knows how (and when) to use it. Along with a meaty foundation full of marvelous slurs and slides, Kitagawa plays a heartfelt solo on his trio ballad "Tell Me Why."

Balance makes no statement other than "Sit back, relax, open your ears real wide, and let's see how far that smile can stretch." This may confound those who demand fealty to some unnamed musical higher calling, but Sellenraad's music is tailor-made for that first spring night when it's warm enough to roll down the car windows, pop the sunroof, and let the stars pour in. That was CTI Records at its best. And so is this.