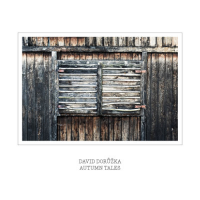 David Doruzka is from the Czech Republic. He plays impressionistic guitar very much in the Pat Metheny tradition. Indeed, while studying at Berklee College of Music in Boston, Doruzka was chosen by Metheny to participate as the only guitarist in the 2000 Aspen Snowmass Jazz Colony.

Another major influence on his playing has been a teacher at Berklee, saxophonist Joe Lovano. After graduating, Doruzka stayed on in the US for a year, based in New York, where he recorded his first album, Hidden Paths.

He returned to the Czech Republic where he cut a second album, Silently Dawning. Now—seven years on—comes Autumn Tales, featuring five new compositions, drawing on Jewish influences and the work of Czech composer Bohuslav Martinu, who flirted with jazz.

The album is beautifully packaged with hauntingly atmospheric photographs by Dusan Tomanek, some taken in the village of Slapy, some 30 kilometers south of Prague, where Doruzka spent part of his childhood and where he and his trio rehearsed the music for this CD.

"Glaciers Melting," Doruzka's take on climate change is as angry as this thoughtful young man is prepared to get. The rest of the program sticks to the dreamy autumnal theme, starting with "Tale of the Autumn Sea," on which bassist Jifi Slavik bows his instrument to excellent effect.

"Shir Hamidbar (Song Of The Desert, in Hebrew)" is a lovely, lilting offering. So too Unter Dayne Vayse Shter'n (Under Your White Stars, in Yiddish).

The problem is that the tempo and mood of the album stays the same throughout. This gives coherence of content, but the surfeit of poetic melancholia on occasion makes for a somewhat dreary listening experience.

Bohuslav Martinu's "Opusteny Mily (The Forsaken Lover, in Czech)" is short and slow and can't help much but "Vlacek Motoracek (Little Train, in Czech)," based on an octave harmonic that imitates the sound of the train, goes a long way towards lifting the proceedings. In its charming East European way, it's right up there with such classics as Billy Strayhorn's "Take The A-train" and Duke's "Happy Go Lucky Local."