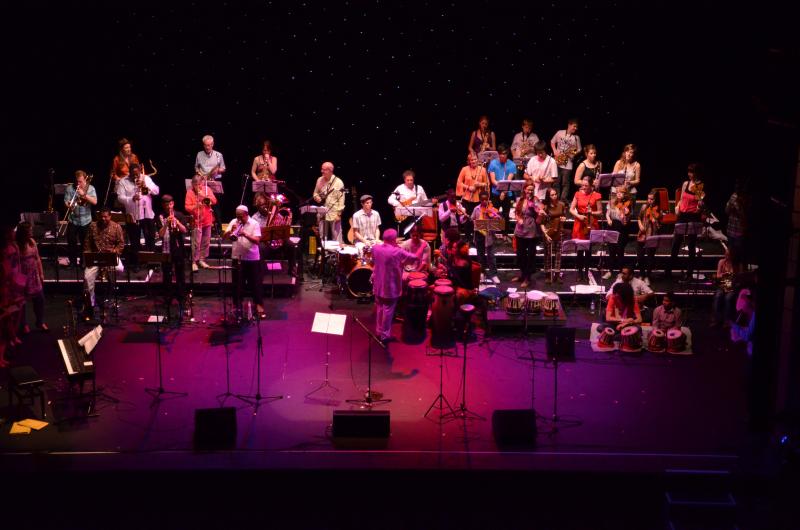 Song of Contagion, Grand Union Orchestra's latest show, would be a strange subject indeed for any other ensemble. But for leader/composer Tony Haynes and his comrades, it sits perfectly within the orchestra's progressive dialogue between the musics and diverse histories of this small planet.

Emerging from a conversation between Haynes and epidemiologist Elizabeth Pisani, Song of Contagion is about disease. More importantly, it explores how responses to it are frequently shaped not by need but by social, racial and economic injustices. The Western media's hysterical concern about the Zika Virus resulted from fears that it might affect the 2016 Olympiad. That same media has persistently ignored the far more deadly Dengue virus. Take AIDS or previously Cholera and similar stories unfold.

That this hard-hitting show brought GUO back to Wilton's in London's East End, itself the site of major 19th century Cholera epidemics, seemed rather appropriate. A heavy subject? Of course, it is. Yet, Song of Contagion is serious but never solemn. GUO's music is, as ever, a dynamic collision of musics and rhythms. It is music for movement and dance—and it is music that makes you clench your fist. Bhangra rhythms and the tabla of maestro Yousuf Ali Khan bridged continents on "Song of Cholera" taking the disease from London to Kolkata and other places where it still runs rife. The human voice has a special place in GUO's world and, here, voices from India, Bangladesh, Africa, the Caribbean and Malaysia combined as an aural and visual testament to how we might act together as a species in the face of contagion.

The contrast between the strings, percussion and horns on "Song of HIV" was incredibly effective and affecting. Here, the music built slowly and powerfully with some beautifully plaintive trombone from Vij Prakash set against some fine work from the (very) young string trio of Lily Baker Haynes, Abigail Adams and Jessica Judge. But it was the climax to "Mosquito Songs" that gave the work its musical and moral centre. African chants were picked up first by trumpeter Claude Deppa and with an all-too-brief flute solo from Louise Elliott. Then it was the drums. With the great South African percussionist and original GUO member Brian Abrahams returning to the fold, this was a kaleidoscope of world rhythms, as congas, kit drums, tabla and African drums crashed together.

The second half of the show built more slowly. A music hall parody seemed perfect for "Song of Broken Hearts" (cardiovascular disease), beautifully and wittily delivered with Davina Wright channelling Marie Lloyd—"A little of what you fancy does you in!" Then different voices told tales of war, displacement and PTSD—"Mind Songs." This was perhaps the most poignant section. Moments of reflection became increasingly intense, as the music again began to take over in the form of a swirling big band section with contributions from Deppa and Paul Shanti Jayasinha on trumpets and Chris Biscoe and Tony Kofi on saxophones. And what amazing charts Haynes had given them! A brief encore and a chance to dance came with the bonus of a cameo each for two of Grand Union's Youth Orchestra graduates—Oliver Ross on baritone and Evan Cryer on trumpet. It was over too soon.

Song of Contagion is definitive Grand Union Orchestra—a feast for the ears and the eyes—and the mind!