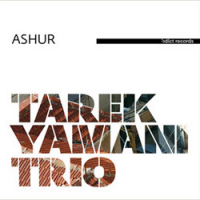 Accolades often disappear in the mists of time but Tarek Yamani who won the Thelonious Monk International Jazz Composer's Award 2010, for "Sama'i Yamani," stamps his credentials in no uncertain terms on Ashur. Born in Lebanon, he is a self-taught pianist who found his groove in several styles including hip-hop, Afro-Cuban and flamenco music. He began concentrating on jazz in 2004 and has gone on to make his mark in the genre. When the inaugural International Jazz Day was proclaimed on April 30, 2012, Yamani was invited to the UN where he performed "India" with saxophonist Wayne Shorter, tablaist Zakir Hussain, bassist Richard Bona and drummer Vinnie Colaiuta.

Yamani's recognition is well-deserved. He plays with cognitive flair, opening a melody in a vibrant pool of rich harmonic ideas and never shies from being adventurous. On this trio recording, he plays five originals and reshapes a pop tune, three jazz standards and pays homage to Bach. He also makes a change in the piano trio format dispensing with the bass for the tuba of Goran Krmac.

On "Giant Trane," his tribute to John Coltrane, Yamani improvises around emphatic chords and then dips into the bright melody abetted by the crisp drumming of Kristijan Krajncan before adding some sumptuous bop. His conceptualization of Coltrane's "26-2" is stylistically assured. He escarps the melody with hard-hitting chords and then slides into context moving through modes as the music billows and sways. His variations ooze sinew and flex as he brings in a breath of fresh air to the composition.

Yamani is a dynamic performer with an intuitive feel for melodicism and development. This makes him worth watching.