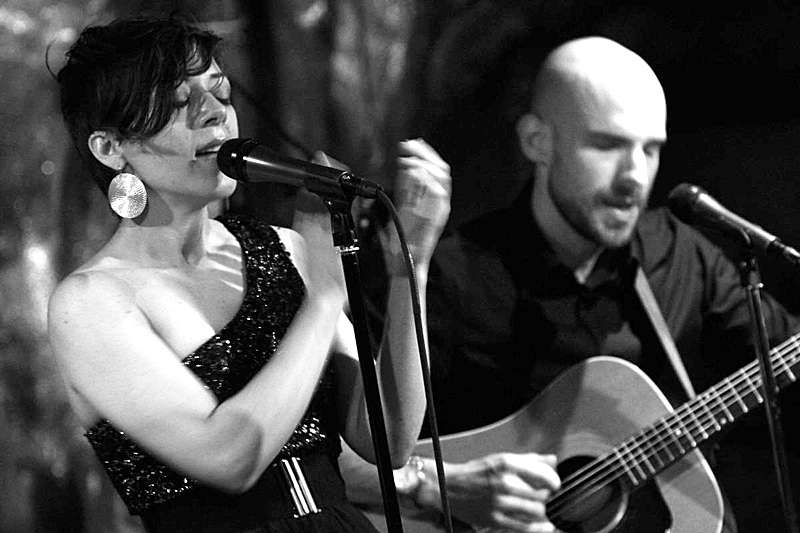 It was a cool, whistful, and breezy Saturday evening. Sounds of improvisation and ingenuity seeped out of the edifices of multiple, cozy and packed venues---and into the air of the night. It was the final night of The Art of Cool Jazz Festival and one of several closing acts featured Grammy-nominated jazz vocalist Gretchen Parlato and award-winning bassist/singer/songwriter Alan Hampton. The two long time musical friends took their places, side by side, at Durham's PSI Theatre to a sold-out crowd.

The duo, in addition to their own solo careers, have worked together for quite some time now. Hampton has often served as the bassist in Parlato's band, and was featured on two of her four albums which include Gretchen Parlato, In a Dream, The Lost and Found (co-produced by another festival headliner and friend Robert Glasper) and Live in NYC.

Hampton, who has released two albums, Moving Sidewalk and Origami For the Fire, was a quintuple threat for the night. Yes, a quintuple threat—singing and playing four instruments including the piano and his bass. As the sole instrumentalist, he was a joy to watch as the audience curiously awaited to see what instruments he would choose. With each song, his instrument selection provided unique colors and textures that supported Parlato and his voices, showcasing his musical legerity and creative sense of orchestration.

As far as his singing is concerned, hmm... he's a wonder.

His vocal execution always results in a bright musical verve, characterized by warm melodic leaps between C3 and A4, as he simultaneously provides firm underlying harmonies on the stringed instruments he plays. Moreover, even though his vocal style is filled with melodic and rhythmic vigor, embedded into his singing is a steady sincerity and candor that is rare. Hampton's mind is polyphonic madness—he's a dreamy tenor and vocal tour de force.

Hampton and Parlato's vocals are a pleasant and delightful match.

No matter which song she chooses to cover, whether originally edgy or super sultry, Parlato is an expert at re-contextualizing songs through her faultlessly subdued, light and authentic vocal style. She is always true to her own interpretations that are characterized by her well organized rhythms (oftentimes clapping out the rhythm at the beginning of her songs), keen harmonization, and her mastery of sustained legato notes. It's also how her vocals engage the musical accompaniment. She oftentimes homogenizes her voice with other instruments in the band, creating beautiful monophonic riffs. At other times, she's in an improvisational zone with her own licks.

The songs Parlato and Hampton performed for the night, each had their own ethnographic history (which Parlato shared with the audience before they performed the piece), illuminating their taste for music from various cultural backgrounds, genres, and eras. There was even a Michael Jackson selection, from his childhood days, placed in the mix.

They also performed pieces from their albums—such as the original "Still," from Parlato's Lost and Found recording. Parlato wrote the lyrics that completely captured the essence of agape love and Hampton composed the music. The melody of "Still," alone, is powerful and has its own animation. It was performed well, sans the lively and upbeat instrumentation on the record version—which featured piano and drums.

The song "Magnus," a lullaby, was one of the most heart charming performances for the night. Parlato invited the audience to sing the chorus, "ah wee, ah wo, ah wa, ah wa ya wee," which was terribly catchy and endearing. The quiet and unusually attentive audience even broke out into harmony at the request of Parlato. But the loveliness of "Magnus" was shaped by Hampton's bass accompaniment, which he chose to utilize the lower register of the bass, creating a deep, dark, and beautiful tone that filled the entire theatre.

Despite a minor sound level glitch, the night was an enchanting experience of two of jazz music's most popular young musicians. The duo brought the audience into a musical excursion of collective introspection and empathy.

I like the subjects of jazz, politics, and faith. Like...a lot.