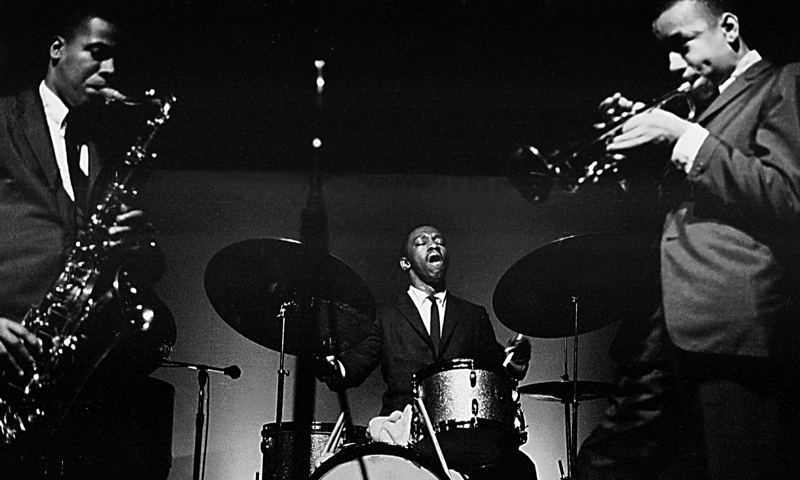 By Anton Rasmussen
October 31, 2013
Sign in to view read count

"Jazz Washes Away the Dust of Everyday Life" —Art Blakey

So said, Abdullah Ibn Buhaina (1919-1990), more widely known to the world of jazz by his pre-Islamic name: Art Blakey. Blakey was my first introduction into the musicality of jazz drumming and, in some senses, my introduction to a lifelong love of jazz.

Truly a powerhouse in swing and blues, Blakey led the hard bop playing Jazz Messengers from the 1950s to the 1980s (recording for Blue Note Records between 1947 and 1964), and holding claim to famous alumni such as Wayne Shorter, Freddie Hubbard, Bill Pierce, Branford Marsalis, and Chuck Mangione, to name but a few.

Art Blakey began drumming, as many people know, in a way that transcends the light air of his feather bass drumming and soft touch of his ride cymbal comping: by being held at gunpoint at a Pittsburgh joint called The Democratic Club in the mid 1930's; forced to give up his seat at the piano he'd been playing and made to play the drums, this would begin a six decade career for Blakey as one of jazz drumming's greats.

Though Blakey was a force to be reckoned with on the drum set, playing in the style of Chick Webb and Big Sid Catlett, don't let that make you think he couldn't be musical. Yes, yes, we've all heard the drummer jokes (like, what do they call the guy that hangs around musicians? A drummer!); but, as a bandleader and drummer, Blakey always played in the most musical way; he always served the song. In fact, this is the aspect of his drumming that most draws one in—and the reason I was drawn to his drumming while studying music theory.

All one has to do is listen to Blakey's arrangements to know just how musical a drummer can be.

Drummer jokes aside, it's not a rule that drummers can't be musical leaders. In fact, some of the best drummers in the world are also great band leaders. And Blakey was one of those great bandleader/great drummer/great musician types. He played for over 60 years and inspired generations to look at drumming in a new way: with an ear toward the music; always placing the music first. But the converse is also true, According to Chris Kelsey, "Blakey's influence as a bandleader could not have been nearly so great had he not been such a skilled instrumentalist." 4

According to Wynton Marsalis, graduate of the Blakey School for Swing and a very notable trumpeter, "On the eighth day, God created Art Blakey." 1 Such was the esteem given to a man greater at his job than most before or after.

A Teacher of Time

Whether you're listening to the rolling tomtoms and snare solo of "Sakeena's Vision" (truly a lesson in keeping a straight pulse on the hats while throwing fills around the kit—signature Blakey to be sure) or you're desperately trying to find the proper place for the bass drum kicks on Thelonious Monk's "Humph," Blakey is there to teach. And his lessons all come from a place of tremendous experience.

Listening to 1947's "Humph" and 1981's "Cheryl," one quickly finds that Blakey's style changed drastically over time and followed the development of jazz. So, it wouldn't necessarily be fair to say that Blakey had one style of drumming—in fact, he created many styles during his long career.

According to John Ramsay, "When you compare the two [time periods], I think you can hear how Art's style grew and evolved over the years. The 1947 recording shows a style more like that of the 1930's and 1940's, whereas the 1981 recording is like that of the be-bop and hard bop style that Art helped create." 1

And that's really what we get with Art Blakey: the creation of music from the seat of a drum throne. He always seemed to be doing something new. To prove Blakey's willingness to be the first—at anything, really—there's a fun little trivia fact that, in 1960, Blakey's Jazz Messengers actually became the first American jazz band to play in Japan—this would begin a relationship with the Japanese people that would persist for decades. 1

An Indestructible Introduction to Musical Drumming 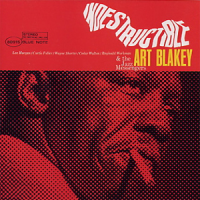 The album that first introduced me to Art Blakey was his last Blue Note Records album, Indestructible (Blue Note, 1965). The lineup for Indestructible consisted of the following players:

The reason I was likely introduced to Blakey with Indestructible is because I spent several months while I was at Berklee learning the drum part to "The Egyptian." The infamous "Blakey Triplets" open up Indestructible and introduce the listener to what goes on to be a full on be-bop/blues album with some of the most catching drum work one will find in the jazz community—and all of it is musical. 3

Fortunately, for those who seek the knowledge Blakey has to offer, there are countless interviews and conversations with Mr. Blakey around the Internet. His insight into the world of music will be sure to provide the same amount of benefit to you as it did to me.

Some Musical Drumming Lessons to Learn

The following is but a small sample of Blakey's vast discography; however, there are elements from each of these albums and songs that will lead one through the musical landscapes that defined Art Blakey's drumming (all of these recommendations are taken from the outstanding drum lessons of John Ramsay from Art Blakey's Jazz Messages.) 1

Blakey Triplets: "The Egyptian" Indestructible (Blue Note, 1965). The intro has a really musically interesting feel to it. As I noted above, it was this part that introduced me to how musical Blakey was as a drummer.

Comping with Small Fills: "Lester Left Town" The Big Beat (Blue Note, 1960). Blakey plays hits on the tomtom during the trumpet solo—it's a great example of Blakey's ability to comp. Sure, it's a small part; but, it fits so well into the trumpet solo while the trumpeter (Hubbard, I believe) hits a staccato one note patterned fill.

Polyrhythmic Ideas: "A Night in Tunisia" A Night in Tunisia (Blue Note, 1960). During the intro to this song, Blakey develops polyrhythms with the toms and various percussive elements. Blakey brings the polyrhythmic feel back during the trumpet solo (using the snare and crash), which is just fantastic! It was here, during this trumpet solo, that I first learned how one could musically use the 3 against 4 polyrhythm within a swing context.

Call and Response: "Honeysuckle Rose" The Unique Thelonious Monk (Riverside, 1956). Several times during this song, Blakey and Monk do call and response figures. It's really a fun listen!

Have a favorite Art Blakey recording? Post it in the comments section below.