Pierce, William (Watson), saxophonist and educator; b. Hampton, Va, September 25, 1948. Bill was raised in Jacksonville and Miami, Fl. His parents, Frances and William, Sr. were educators. Bill began saxophone lessons in public school. In his senior year he took oboe lessons at the university of Miami. He attended Tennessee State University for two years. He transferred to Berklee College of Music in 1968, graduating in 1972. Bill began performing in the early 70's in Boston while a student, appearing with artists such as Marvin Gaye and Stevie Wonder. In 1980, he joined Art Blakey's Jazz Messengers, serving as musical director and sharing the bandstand with other young talents including Bobby Watson, Wynton and Branford Marsalis, and Donald Harrison

Nice Jazz Festival Théâtre de Verdure Nice, France July 16-20, 2019 Sebastien Vidal, the artistic director of the Nice Jazz Festival, expressed his goals for 2019 as diversity and inclusivity. The Festival takes place in the center of the city, near a tram line station. They welcomed forty ...

Philadelphia-born guitarist, composer Kevin Eubanks has been building a creative catalog and playing style since his 18-year tenure as the guitarist and music director of TV's, The Tonight Show Band ended in 2010. Eubanks took New York by storm, starting out in straight ahead jazz clubs, followed by progressive albums for contemporary jazz giant GRP Records ... 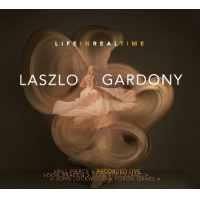 Life In Real Time is somewhat unique in that it's in the mold of Laszlo Gardony's previous recordings and a departure from the norm for that pianist of note. And just how is that possible? That's easy to answer: Gardony hews to his norm by working with his longtime trio mates--bassist John Lockwood and drummer Yoron ...

“Jazz Washes Away the Dust of Everyday Life" --Art Blakey So said, Abdullah Ibn Buhaina (1919-1990), more widely known to the world of jazz by his pre-Islamic name: Art Blakey. Blakey was my first introduction into the musicality of jazz drumming and, in some senses, my introduction to a lifelong love of jazz.

Born and raised in Paris, Jonathan Orland started playing music during his childhood, starting with piano and clarinet. He got interested in Jazz in his early teenage years, and started learning by himself the saxophone before taking lessons with Thomas Savy, Tom Buckner and André Villégier and Antoine Daurès. Then he passed his music studies diploma ...