Yoron Israel, a native Chicagoan, is one of the most gifted and sought after musicians in the music industry today. Yoron's exciting and tasteful drumming, along with his compositional talents are spotlighted throughout his CD’s. They are "Basic Traneing" (Ronja Music Company), "Chicago" (Double Time), "Live at the Blue Note" (Half Note), "A Gift for You" (Ronja Music Company) All of these fine works have received enthusiastic praise from journalists, musical peers and fans alike. The CD’s represent the extensive depth of Yoron Israel’s musicianship as he continues to evolve as a leader. He brings his unique influences and experiences in the "Jazz", Latin, Gospel, Funk, R & B and Orchestral idioms full circle with his compositions, arrangements, repertoire and ensemble concepts. "Music to be enjoyed by all", as Jack DeJohnette quotes, "A Gift for You" is a sparkling musical offering from a drummer who has good taste. He has a sense of direction and a feeling of joy in his drumming, compositions and arrangements. Yoron Israel is an important voice you should listen to."

"Basic Traneing", reached number three on the National Jazz chart in 2004. It features his current trio "Organic" with organist Kyle Koehler, guitarist Ed Cherry, along with special guests Jay Hoggard (vibraphone/ marimba) and Billy Pierce (tenor and soprano saxophone). Yoron’s group, "Organic" performs original compositions associated with the soulful organ legacy of Jimmy Smith, Larry Young and Lonnie Smith as well as arrangements of "standards" that bridge the gap between musical styles, highlighting the versatility and virtuosity of the musicians.

"Live from the Blue Note" is Yoron Israel’s second recording, featuring his quintet "Connection", with vibraphonist Bryan Carrott, guitarist Ed Cherry, and bassist Sean Conly, along side special guests, trombonist Steve Turre and saxophonist Eric Alexander. "A Gift for You", Yoron’s debut recording was produced by Ronja Music Company, originally released in 1996 and recently re-released in 2006. It includes performances by pianist James Williams, saxophonists Lance Bryant and Donald Harrison, trumpeter Phillip Harper and bassist John Lockwood along with regulars Carrott and Cherry. "Connection " was formed in 1994 and highlights the unique and enticing instrumental blend of drums/percussion, vibraphone/marimba, guitar, tenor/soprano saxophone, and bass. The inspiring interplay is based on common musical vocabularies shared by the band members and formulates a unified ensemble sound that connects the listener to this musical experience.

The Laszlo Gardony Trio With John Lockwood & Yoron Israel At Mezzrow On... 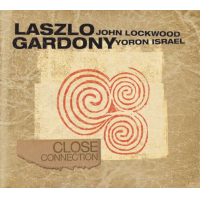 From: Close Connection
By Yoron Israel

All About Jazz musician pages are maintained by musicians, publicists and trusted members like you. Interested? Tell us why you would like to improve the Yoron Israel musician page.