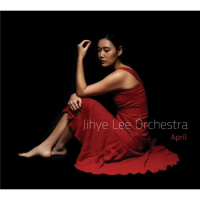 On the morning of April 16, 2014, four hundred seventy-six souls were living life as they knew it, traveling on the ferry Sewol from Incheon to Jeju in South Korea. Then it all came to an abrupt halt when the ship capsized and sank. The South Korean Coast Guard, commercial vessels, and fishing boats managed to arrive in time to save more than one hundred seventy lives; the rest were lost, taken by the ship into a watery grave. That horrific event reverberated through time and space, and it came to inspire vocalist-composer Jihye Lee to create April.

On that fateful day, Lee was nearly seven thousand miles away from her homeland, studying at the Berklee College of Music in Boston. As news of the Sewol made its way across the globe and into her consciousness, a wide mixture of emotions surfaced—sadness, helplessness, anger, heartbreak, and many others, no doubt, that defy language. In the end, she managed to channel them all into this stunning six-part suite. It's a musical triumph born of an unspeakable tragedy, thought-provoking and gut-wrenching all at once. The music sings, sobs, and soars in its unfolding, leaving the listener with a carefully-crafted reflection on the event(s) and a glimpse into Lee's emotional core.

Two of the six pieces—"April Wind" and "Deep Blue Sea"—were written before the Sewol disaster, almost foretelling what was to take place through name and disposition. Lee extended the design of both in the wake of that calamity. Each allows for the composer's hypnotic wordless vocals to glide over the orchestra, but they're very different pieces. "April Wind" covers the whole color, sound, and emotional spectrum(s). Muted voices, high-flying horns, peaceful gestures, and tense episodes all come into play. Soloists have their moments—Alain Mallet's piano work is absorbing, drummer Mark Walker heightens the drama when he plays against the band, a saxophone takes to the sky—but the writing remains the star. "Deep Blue Sea" doesn't cover as much musical ground, but it leaves a firmer impression on the brain. It's an aquamarine jewel, peaceful and passionate in design.

The four other numbers in the suite were all born in the wake of the aforementioned event. "Sewol Ho" opens with a foreboding feeling, as muted brass and flute weave together with others to create a tapestry of danger. That lurking sense of peril plays throughout the piece—as the song builds up, as trumpet and trombone tussle in a stormy sea, as phrases are sharply punctuated, as consonance and dissonance collide—and it comes to serve as an essential musical reminder of what took place. "Whirlwind" deals with the personal and political residuum from the Sewol, using rhythmic motion as a way to capture the swirling of emotions and thoughts that immediately came about after the fact. "Guilty" points toward those who bear the weight of responsibility for this tragedy. A simple ostinato bookending the song comes off like a tolling of the bells, the horns are used to create and frame ominous thoughts, and Bruce Bartlett's guitar and Rick DiMuzio's soprano engage in a pas de deux. The message of the song is clear as day, felt in every note and gesture.

The finale—"You Are Here (Every Time I Think Of You)"—is a musical condolence card to all whose lives were forever changed and damaged by the Sewol incident. It features Sean Jones' masterful and meaningful flugelhorn work in a gorgeously-designed setting. Nobody would've blamed Lee if she had chosen to end things on a sour note or with an unresolved design, but she went the other way, taking and giving sympathy, peace, and perspective in the place of horror. It's a beautiful parting gift on an album filled with powerful music. April is simply unforgettable.

April Wind; Sewol Ho; Deep Blue Sea; Whirlwind; Guilty; You Are Here (Every Time I Think of You).